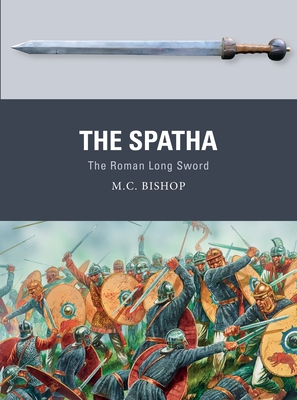 The Roman long sword, the spatha, was central to the Romans' defense of their empire--this title investigates the origins, development, combat use, and lasting legacy of this feared close-combat weapon.

Adopted from the Celts in the 1st century BC, the spatha, a lethal and formidable chopping blade, became the primary sword of the Roman soldier in the Later Empire. Over the following centuries, the blade, its scabbard, and its system of carriage underwent a series of developments, until by the 3rd century AD it was the universal sidearm of both infantry and cavalry.

Thanks to its long reach, the spatha was the ideal cavalry weapon, replacing the long gladius hispaniensis in the later Republican period. As the manner in which Roman infantrymen fought evolved, styles of hand-to-hand combat changed so much that the gladius was superseded by the longer spatha during the 2nd century AD. Like the gladius, the spatha was technologically advanced, with a carefully controlled use of steel. Easy maintenance was key to its success and the spatha was designed to be easily repaired in the field where access to a forge may have been limited. It remained the main Roman sword into the Late Roman period and its influence survived into the Dark Ages with Byzantine, Carolingian, and Viking blades.

Drawing together historical accounts, excavated artefacts, and the results of the latest scientific analyses of the blades, renowned authority M.C. Bishop reveals the full history of the development, technology, training, and use of the spatha: the sword that defended an empire.

Writer, publisher and archaeologist M.C. Bishop is an authority of all aspects of Ancient Rome at war, with particular emphasis on arms and armour of the era. He has written, co-written or edited dozens of books and articles on the subject, and leads tours of Hadrian's Wall and other Roman sites.