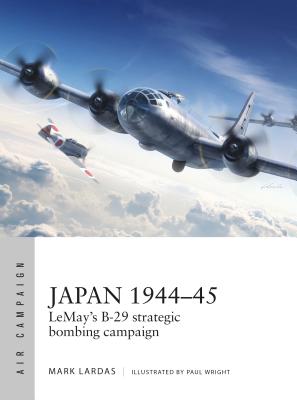 Japan 1944-45 examines the only time in history that a major war was ended by the use of air power. It shows how the United States used a combination of industrial capability and geography to devastate Japan from the air, and why the Japanese, despite a promising start to their defense, proved unable to prevent the XXIst Air Force from destroying their country.

Since the early 1930s air power advocates had claimed that aerial bombardment alone could defeat a nation. Yet by January 1945, while it had been the key to winning ground campaigns, from the German Blitzkrieg to the Allies' advance across the Pacific, air power had failed to demonstrate their most audacious claim: that strategic bombing, by itself, could win a war.

The United States sought to prove it by reducing the Japanese Home Islands' military and industrial capability through bombing alone until they had to surrender.

Mark Lardas holds a degree in Naval Architecture and Marine Engineering, but spent his early career at the Johnson Space Center doing Space Shuttle structural analysis, and space navigation. An amateur historian and a long-time ship modeler, Mark Lardas currently lives and works in League City, Texas. He has written extensively about modeling as well as naval, maritime, and military history.

Adam Tooby is an internationally renowned digital artist and illustrator. His work can be found in publications worldwide and as box art for model aircraft kits. He also runs a successful illustration studio and aviation prints business. He is based in Cheshire, UK. To buy artwork, or contact the artist, visit http://www.adamtooby.com/.

Paul Wright has painted ships of all kinds for most of his career, specializing in steel and steam warships from the late 19th century to the present day. Paul's art has illustrated the works of Patrick O'Brian, Dudley Pope and C.S. Forester amongst others, and hangs in many corporate and private collections all over the world. A Member of the Royal Society of Marine Artists, Paul lives and works in Surrey.