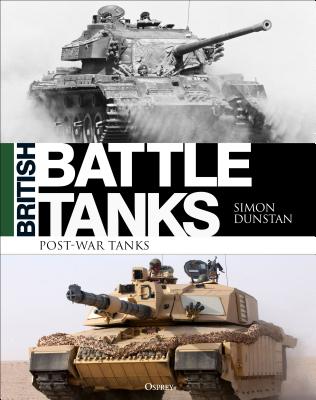 This lavishly illustrated volume details the design, development and operational history of British tanks from the end of World War II through to the present day.

This book, the last in a four-part series on British Battle Tanks covering the whole history of British armored warfare, concentrates on those vehicles that have served following the end of World War II up to the present day.

Starting with the Centurion, the title explores those types that equipped the armored divisions lined up on the German plains to resist any potential Soviet offensive, as well as in Korea and Suez, including the Conqueror, and modern tanks such as the Challenger 2 which are still in service today. Covering the many variants of these and other tanks in British service as well as their deployments around the world, including in Afghanistan and Iraq, this illustrated volume is a comprehensive guide to the development of British tanks since the Second World War.

Simon Dunstan is a well-established author, film-maker, and photographer in the field of military history, and has published several titles with Osprey. He specializes in armored warfare, and has written on this subject for two decades. His books have covered topics such as helicopter and armored warfare in Vietnam, the Challenger main battle tank, the British Guards and armored warfare in Korea. Simon lives and works in London.

"Almost a completely new book from one of the most respected authors on post WW2 British tanks, this is the best and a fitting conclusion to this Osprey series." - John Ham, Tankette

"This richly illustrated book provides a comprehensive guide to the development of British tanks during nearly three-quarters of a century. It should be a boon to modelers who can never get enough of reference materials for inspiration." - Toy Soldier & Model Figure