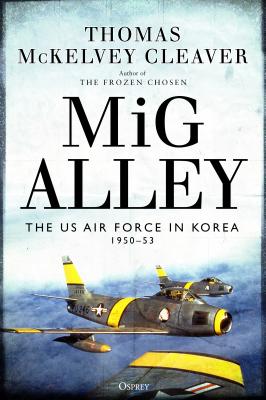 Titled after the wartime nickname for the part of North Korea that was the epicenter of a bitter struggle for air superiority over the Korean Peninsula, MiG Alley offers an in-depth analysis of the US Air Force's war in Korea, packed with interesting and exciting personal stories based on first-person testimony from both American and Soviet sources.

Of the many myths that emerged following the end of the Korean War, the prevailing one in the West was that of the absolute supremacy of US Air Force pilots and aircraft over their Soviet-supplied opponents. The claims of the 10:1 victory-loss ratio achieved by the US Air Force fighter pilots flying the North American F-86 Sabre against their communist adversaries, amongst other such fabrications, went unchallenged until the end of the Cold War, when Soviet records of the conflict were finally opened.

From that point onwards, a very different story began to emerge. Far from decisive American victories over an unsophisticated opponent, the aerial battles of the Korean War were, at least in the early years, evenly matched affairs, fought to an approximate 1:1 victory-loss ratio. Though the Soviet victories declined over the following years, this had more to do with home politics than American tactics.

Regardless of the accuracy of claims and wartime propaganda, one fact stands clear: in the battle for air supremacy over Korea, the US Air Force denied to its opponents the opportunity to intervene over the battlefield. In the face of overwhelming enemy manpower superiority, this allowed the United Nations forces to hold the line in Korea until an armistice that protected South Korea could be put into effect.

In addition to the aerial combat over MiG Alley, this title covers the full range of US Air Force activities over Korea, including the failed strategic bombing campaign and the escalating nuclear threat. Incorporating first-hand accounts from those involved, both US and Soviet, this new history of the US Air Force in Korea reveals the full story of this bitter struggle in the Eastern skies.

Thomas McKelvey Cleaver has been a published writer for the past 40 years, with a lifelong interest in the Korean War, and this work is the product of 25 years of research. He is the author of Aces of the 78th Fighter Group and F4F and F6F Aces of VF-2, as well as Fabled Fifteen: The Pacific War Saga of Carrier Air Group 15 and The Bridgebusters: The True Story of the Catch-22 Bomb Group. He is also a regular contributor to Flight Journal magazine. During his 30 years as a screenwriter in Hollywood, he wrote the cult classic The Terror Within and worked as a supervising producer on a number of TV and cable series. He served in the US Navy in Vietnam and currently lives in Encino, California.

"More than sixty-five years after the Korean War, Tom Cleaver provides an objective assessment of the classic jet clashes along the Yalu River. For decades both the U.S. Air Force F-86s and the Communist MiG-15s claimed a 10-1 victory-loss ratio, an impossibility well known to aviation historians. But with rare resources, MiG Alley demonstrates that the Sabres and MiGs were much closer to parity than previously recognized, while paying tribute to the often outnumbered U.S. pilots who kept enemy airpower off the backs of allied ground forces in the south." - Barrett Tillman, author of 'On Wave and Wing'

"Seen as a whole, MiG Alley is a most interesting read, complementing well the author's history of the US Navy's role in Korea, and genuinely offers perspectives that many might not have considered." - Aeroplane Monthly

"Cleaver … effectively conveys the sheer destruction wrought by the U.S. bombing missions on North Korea and its citizens." - Publishers Weekly

"Thomas McKelvey Cleaver's book, MiG Alley is extremely well written … Each chapter teaches the reader much about this ‘Forgotten War.’ I thoroughly enjoyed the read … I highly recommend it." - Flight Journal

"The author’s well-written analysis encompasses fascinating, first-hand
accounts from combatants on both sides to recount the fierce fighting in
the skies over the Korean Peninsula." - Toy Soldier & Model Figure

"More bombs fell on North Korea in three years than were dropped on Nazi Germany during all of World War IL Despite such statis­tics, the Korean conflict is often called a forgotten war. The author seeks to redress this imbalance with an in-depth look at the air campaign, with a focus on the U.S. Air Force. He uses numerous personal stories from combatants on both sides to provide vivid detail in the text, revealing that the air war was much messier and less one-sided than the accepted ver­sion of events would indicate." - Military Heritage