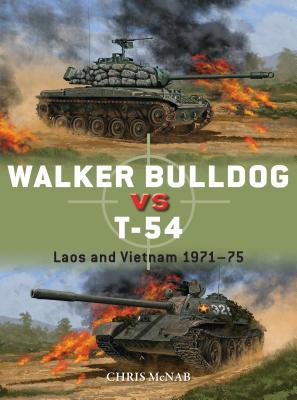 During the later stages of the Vietnam War, the US-made M41 Walker Bulldog light tank fought the Soviet-designed T-54 main battle tank in a series of battles in Laos and Vietnam. Fully illustrated, this engaging study investigates the origins, combat record, and legacy of these two armored fighting vehicles.

Illustrated with full-color artwork as well as rare and revealing photographs from both sides, this book studies these two iconic tanks in Vietnamese service, examining how their differing designs and fighting doctrines affected their performance in this unique theater of combat.

During the Vietnam War, both the United States and the Soviet Union supplied all manner of weapon systems to the opposing sides, including tanks and armored vehicles. Two tanks in particular took momentary prominence in the later years of the conflict. On the South Vietnamese side, it was the US M41 Walker Bulldog; for the communist North Vietnamese, the Soviet-supplied T-54 main battle tank was the core of their armored power.

In their first major engagement, during Operation Lam Son 719 (February–March 1971), it was the Walker Bulldog in the ascendant, but in later battles the T-54s inflicted heavy losses on their lighter opponents, taking the advantage through their superior maneuverability and gunnery.

Dr. Chris McNab is an experienced specialist in wilderness and urban survival techniques. He has published over 20 books including: How to Survive Anything, Anywhere -- an encyclopedia of military and civilian survival techniques for all environments -- Special Forces Endurance Techniques, First Aid Survival Manual, and The Handbook of Urban Survival. In his home country of Wales, UK, Chris provides instruction on wilderness hunting techniques and he is also an experienced martial arts instructor.
"Modellers should find a wealth of photographic and textual resources to inspire models, vignettes and dioramas of the Walker Bulldog and T-54, and Vietnam. Recommended." - Kit Maker