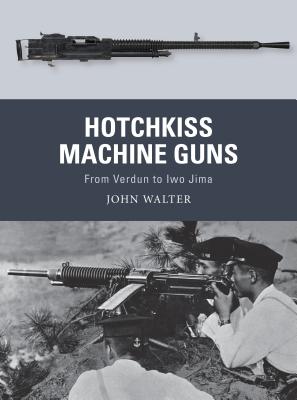 Featuring contemporary photographs and full-color artwork, this title explores the action-packed history of the Hotchkiss machine gun and its derivatives, which were used around the globe for nearly fifty years.

Created by a long-forgotten Austrian nobleman, Adolf Odkolek von Augezd, the air-cooled Hotchkiss machine gun was the first to function effectively by tapping propellant gas from the bore as the gun fired. Although the Hotchkiss would be overshadowed by the water-cooled Maxim and Vickers Guns, it proved its effectiveness during the Russo-Japanese War. The gun, quirky though it was, was successful enough to persuade Laurence Benét and Henri Mercié to develop the Modèle Portative: a man-portable version which, it was hoped, could move with infantrymen as they advanced. Later mounted on tanks and aircraft, it became the first automatic weapon to obtain a "kill" in aerial combat.

Though it served the French and US armies during World War I (and also the British in areas where French and British units fought alongside each other), the Odkolek-Hotchkiss system was to have its longest-term effect in Japan. Here, a succession of derivatives found favor in theaters of operations in which water-cooling could be more of a liability than an asset. When US forces landed on Saipan, Guam, and Iwo Jima, battling their way from island to island across the Pacific, it was the "Woodpecker"--the Type 92 Hotchkiss, with its characteristically slow rate of fire--which cut swathes through their ranks. Supported by contemporary photographs and full-color illustrations, this title explores the exciting and eventful history of the first successful gas-operated machine gun.

Adam Hook studied graphic design, and began his work as an illustrator in 1983. He specializes in detailed historical reconstructions, and has illustrated Osprey titles on subjects as diverse as the Aztecs, the Ancient Greeks, Roman battle tactics, several 19th-century American subjects, the modern Chinese Army, and a number of books in the Fortress series. His work features in exhibitions and publications throughout the world.