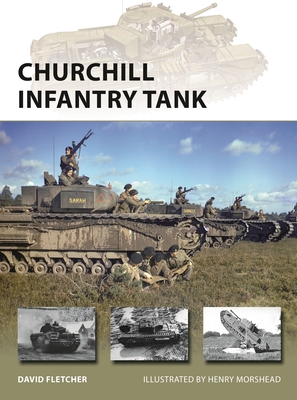 David Fletcher's history of the most important British-made tank of World War II.

The NVG covers all seven Marks of Churchill gun tank with variations and the curious self-propelled gun of 1941/42, but not the so-called "Funnies" or the armored recovery vehicle variants.

It will begin with the prototype tank A20, which has not been covered in any detail before, then go on to look at all seven Marks of Churchill, in particular their different guns. The book will also look at the tank's service in Russia and later with the Irish, Jordanian and Australian Armies. It will also feature the disastrous Dieppe raid of August 1942, ending with a brief look at the Black Prince or super Churchill which was only developed up to the prototype stage at the end of World War II.


The Churchill is an interesting tank, quite different from any other British tank of World War II, built outside the normal process of British tanks and the Department of Tank Design. It was built under the watchful eye of the Prime Minister, after whom it was named, by a firm with no previous experience of tank production. Despite being condemned as unsuitable and more than once being scheduled to be replaced by a better design this never actually happened. It remained in production and ultimately vindicated itself since, although it was slow and noisy it was found to have superior climbing ability and thicker frontal armor than the vaunted German Tiger.


Its classification as an Infantry Tank has been extensively criticised although recently one or two authors, notably Americans, seem to have revised their views on this and even Field Marshal Montgomery, who advocated a Universal Tank to fulfil all roles, found the Churchill a useful tank on many occasions, particularly considering its ability to absorb punishment.

Henry Morshead is a designer in the British helicopter, automotive and bespoke sectors, with clients including BAC, Noble, NIO, and Royal Enfield. He is also a STEM Ambassador with the Bloodhound supersonic car project. A former officer in the Royal Engineers and illustrator for Jane's, he maintains a keen interest in the design and use of military land and air vehicles.