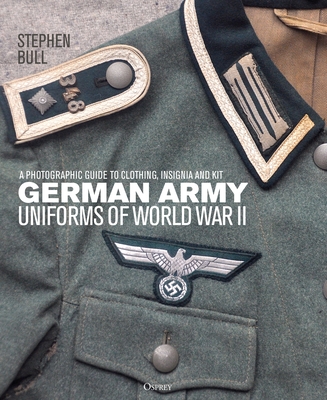 A detailed illustrated history of the uniforms of the German army from the period leading up to World War II until 1945.


In the years after World War I, the defeated and much-reduced German Army developed new clothing and personal equipment that drew upon the lessons learned in the trenches. In place of the wide variety of uniforms and insignia that had been worn by the Imperial German Army, a standardized approach was followed, culminating in the uniform items introduced in the 1930s as the Nazi Party came to shape every aspect of German national life. The outbreak of war in 1939 prompted further adaptations and simplifications of uniforms and insignia, while the increasing use of camouflaged items and the accelerated pace of weapons development led to the appearance of new clothing and personal equipment. Medals and awards increased in number as the war went on, with grades being added for existing awards and new decorations introduced to reflect battlefield feats. Specialists such as mountain troops, tank crews and combat engineers were issued distinctive uniform items and kit, while the ever-expanding variety of fronts on which the German Army fought – from the North African desert to the Russian steppe – prompted the rapid development of clothing and equipment for different climates and conditions. In addition, severe shortages of raw materials and the demands of clothing and equipping an army that numbered in the millions forced the simplification of many items and the increasing use of substitute materials in their manufacture.

In this fully illustrated book noted authority Dr Stephen Bull examines the German Army's wide range of uniforms, personal equipment, weapons, medals, and awards, and offers a comprehensive guide to the transformation that the German Army soldier underwent In the period from September 1939 to May 1945.

Museum curator and university external examiner Dr Stephen Bull studied at the University of Wales, and worked at the BBC and National Army Museum in London. Now Curator of Military History and Archaeology for Lancashire County Museums he has completed an MBA, and been elected Member of the Chartered Institute for Archaeologists. Published in a variety of languages on both sides of the Atlantic he was listed for the Portico Prize for Literature. His latest book 'The Old Front Line' is published in the UK and US, and now translated into Dutch.

Stephen has made many TV and radio appearances including the series 'Battlefield Detectives' and 'Instruments of Death', both shown internationally, and the BBC 'One Show'. His book of the Channel 4 series 'Last War Heroes', is available in North American, UK and Norwegian editions. The series took Canadian Screen Award for 'best history' under its US title 'D-Day to Victory' in 2013. A consultant to the University of Oxford, Stephen has assisted in the creation of a European database to document the individual experience of the First World War through archives, photographs, and objects. The photograph shows Stephen (right) with Lorenz Andraes at the German National Library, 'DNB', Frankfurt.