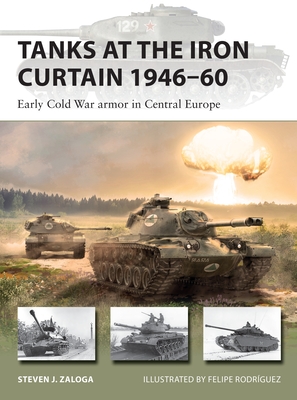 A study of the Soviet and NATO armored forces that faced each other off in Central Europe in the early Cold War, and how their technology, tactics, and doctrine were all rapidly developed.

For 45 years, the most disputed point in the World was the dividing line between East and West in Europe; here the use and development of tanks was key. In this fully illustrated study, author Steve Zaloga, describes how Soviet and NATO tanks were deployed in the early years of the Cold War, and how a generation of tanks such as the Soviet T-44/T-54 and IS-3, British Centurion, US Army M26/M46 Pershing (all developed during World War II) saw extensive service after the war had ended. Initial post-war generation tanks including the Soviet T-54A, T-10 heavy tank, British late-model Centurions, Conqueror, US Army M41, M47, M48 and the French AMX-13 are examined in detail alongside the most important technical trends of the era: the development of shaped-charge anti-tank projectiles, the influence of anti-tank missiles, and the introduction of chemical/nuclear protection and night fighting equipment. The book also considers the influence of post-war doctrine and tactics on tank technology and the effect of regional conflicts such as the 1950 Korean War, the war in Indo-China, and the 1956 Mid East War on tank warfare.