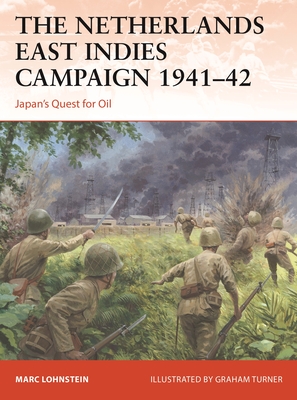 At the end of 1941, Imperial Japan targeted The East Indies in an attempt to secure access to precious oil resources. The Netherlands East Indies Campaign featured complex Japanese and Allied operations, and included the first use of airborne troops in the war. This highly illustrated study is one of the less well-known campaigns of the Pacific War.

Imperial Japan's campaigns of conquest in late 1941/early 1942 were launched in order to achieve self-sufficiency for the Japanese people, chiefly in the precious commodity of oil. The Netherlands (or Dutch) East Indies formed one of Japan's primary targets, on account of its abundant rubber plantations and oilfields--the latter, in particular, was highly prized, given that the colony was the fourth-largest exporter of oil in the world. Japan itself lacked any form of domestic production.

The Japanese dispatched an enormous naval task force to support the amphibious landings over the vast terrain of the Netherlands East Indies. The combined-arms offensive was divided into three groups: western, center and eastern. Borneo was struck first in mid-December 1941, and assaults on Celebes, Amboin, Timor, Java, Sumatra, Ambon, and Dutch New Guinea followed. Allied forces in the NEI comprised British, Australian, Dutch, and American personnel. A combined theater headquarters (ABDACOM) was established on January 15 1942 in an effort to counter the Japanese offensives. The isolated airfields and oilfields were, however, picked off one by one by the Japanese, in the rush to secure the major islands before major Allied reinforcements arrived.

This superbly illustrated title describes the operational plans and conduct of the fighting by the major parties involved, and assesses the performance of the opposing forces on the battlefield, bringing to life an often-overlooked campaign of the Pacific War.

MARC LOHNSTEIN holds an MA in history; his main focus is the former
Dutch colonies in Indonesia and Surinam. He specializes in colonial army and police organization, equipment, uniforms and tactics, and has published several studies on these subjects. He is currently assistant curatorat the Royal Home for Retired Military Personnel & Museum Bronbeek, at Arnhem in the Netherlands.

Graham Turner is a leading historical artist, specializing in the medieval period. He has illustrated numerous titles for Osprey, covering a wide variety of subjects from the dress of the 10th-century armies of the Caliphates, through the action of bloody medieval battles, to the daily life of the British Redcoat of the late 18th century. The son of the illustrator Michael Turner, Graham lives and works in Buckinghamshire, UK.