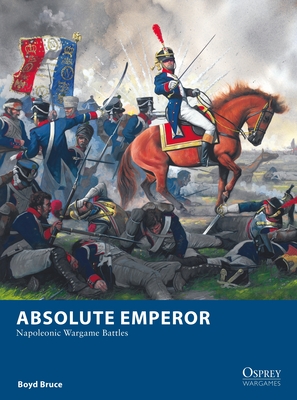 A set of mass battle rules for wargaming in the Napoleonic Wars, allowing players to refight the battles that shaped Europe.

From the late Revolutionary Wars and Egyptian campaign, to the battles of Austerlitz, Borodino, Leipzig and Waterloo, Absolute Emperor is a mass battle wargame that provides all the rules needed to play during this period of grand armies and sweeping campaigns. Players' armies are composed of multiple corps, with command and control being of the utmost importance, all influenced by the elan of your general. Do you follow in the footsteps of Napoleon and be crowned the Absolute Emperor or stand against tyranny as Wellington and Blücher.

Boyd has been a librarian, a soldier, a father, and a wargamer. Relying upon his history degree, his love of books, his years of service, and a passion for wargaming, he has made the transition from participant to instigator with Absolute Emperor. Playing all types of tabletop wargaming, Boyd's main gaming interest will always be historical, and Napoleonic gaming holding a favorite place in his heart.

Mark Stacey was born in Manchester, UK, in 1964 and has been a freelance illustrator since 1987. He has a lifelong interest in all periods of history, particularly military history, and has specialized in this area throughout his career. He now lives and works in Cornwall.