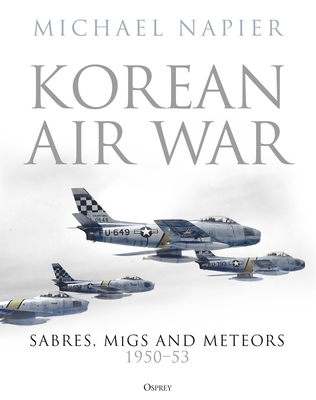 From acclaimed aviation historian Michael Napier, this is a highly illustrated survey of the air war over Korea.

The Korean War holds a unique place in aviation history. It saw the first large-scale jet-versus-jet combat and it was the first military action of the Cold War, fought by both the newly independent United States Air Force and the recently formed Chinese People's Liberation Army Air Force.

In a meticulously researched volume, former RAF Tornado pilot Michael Napier unravels the complex narrative of events, describing the course of operations in the air and the major campaigns of the land war. He examines in detail the air power of the major combatants, which included North and South Korea, the UK, Australia, Canada and South Africa as well as China, the USA and the USSR.

Packed with stunning contemporary images and including first-hand combat reports, Korean Air War is a groundbreaking exploration of a much forgotten conflict, which nevertheless provided lessons about the organization and prosecution of modern aerial warfare that remain relevant through to the present day.

Michael Napier joined the RAF in 1978 as a University Cadet and studied Aeronautical Engineering at the Imperial College, London. He qualified as a fast jet pilot in 1985, and his military flying career encompassed both the Cold War and operations over Iraq after the Gulf War. Michael left the RAF in 1997 and joined British Airways, first as a First Officer and later as a Captain.
Michael has written articles for aviation magazines including Aircraft Illustrated, Flypast, Aeroplane Monthly and Cross & Cockade. He is the author of various books published by Osprey including In Cold War Skies, Korean Air War and RAF Tornado Units of Gulf War I in the Osprey Combat Aircraft series. Michael lives near Chipping Norton, Oxfordshire.

"It’s a fabulous book, both for students of the Korean War and for those with an interest in aviation combat." - Duncan Evans, The Armourer

"Set time aside for this book – once started, it’s an engrossing read." - Airfix Model World