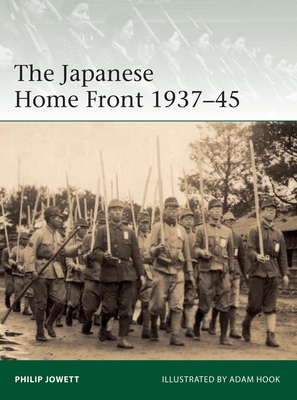 During World War II, Imperial Japan was the world's most militarized society, with a host of uniformed organizations supporting the war effort in East Asia and the Pacific and ultimately tasked with defending the Home Islands. Featuring full-color artwork, this book reveals the organization and appearance of the military and civil-defense forces that supported the Japanese war effort from 1937 to 1945.

From the beginning of the Second Sino-Japanese War in 1937 until the Japanese surrender in August 1945, a multitude of military and civil-defense forces strove to support the Japanese war effort and latterly prepared to defend the Home Islands against invasion. During World War II, Japan was the world's most militarized society and by 1945 nearly every Japanese male over the age of 10 wore some kind of military attire, as did the majority of women and girls. In this volume, Philip Jowett reveals the many military and civil-defense organizations active in wartime Japan, while specially commissioned artwork and carefully chosen archive photographs depict the appearance of the men, women, and children involved in the Japanese war effort in the Home Islands throughout World War II.

Philip Jowett was born in Leeds in 1961, and has been interested in military history for as long as he can remember. His first Osprey book was the ground-breaking Men-at-Arms 306: Chinese Civil War Armies 1911–49; he has since published the three-part sequence The Italian Army 1940–45 (Men-at-Arms 340, 349 and 353). He lives in North Lincolnshire, UK.

Adam Hook studied graphic design, and began his work as an illustrator in 1983. He specializes in detailed historical reconstructions, and has illustrated Osprey titles on subjects as diverse as the Aztecs, the Ancient Greeks, Roman battle tactics, several 19th-century American subjects, the modern Chinese Army, and a number of books in the Fortress series. His work features in exhibitions and publications throughout the world.