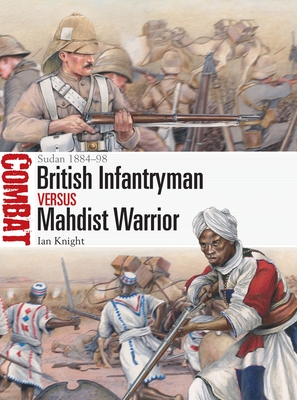 A new study of the battles fought between Queen Victoria's infantry and the formidable Madhist Army in the Sudan, from the Gordon Relief Expedition of 1884–85 to the battles of Atbara and Omdurman in 1898.

In the early 1880s, Britain intervened in independent Egypt and seized control of the Suez Canal. British forces were soon deployed to Egypt's southern colony, the Sudan, where they confronted a determined and capable foe amid some of the world's most inhospitable terrain. In 1881 an Islamic fundamentalist revolt had broken out in the Sudan, led by a religious teacher named Muhammad Ahmad bin Abd Allah, who proclaimed himself al-Mahdi, "The Guided One." In 1884, Mahdist forces besieged the Sudanese capital of Khartoum; Colonel Charles Gordon was sent to the city with orders to evacuate British personnel, but refused to leave. Although the British despatched a relief column to rescue Gordon, the Mahdists stormed Khartoum in January 1885 and he was killed. British troops abandoned much of the Sudan, but renewed their efforts to reconquer it in the late 1890s, in a bloody campaign that would decide the region's fate for generations. Written by leading expert Ian Knight, this fully illustrated study examines the evolving forces, weapons and tactics employed by both sides in the Sudan, notably at the battles of Abu Klea (January 16–18, 1885), Tofrek (March 22, 1885), and Atbara (April 8, 1898).

Ian Knight is widely acknowledged as a leading authority on the colonial campaigns of the Victorian Empire. He has written extensively on the subject including several Men-at-Arms, Campaign, Essential Histories, Elite and Fortress titles for Osprey, including the Queen Victoria's Enemies series. He has worked on a number of television documentaries and is a founder member of the Victorian Military Society. He has received awards for his work on campaigns in southern Africa during the 19th century, notably the Anglo-Zulu War. He lives in West Sussex, UK.

Raffaele Ruggeri was born in Bologna where he works and lives with his wife. After studying at the Fine Arts Academy he worked in several areas of graphics and design before deciding to devote himself to illustration. He has long been interested in military history and has illustrated a number of books for Osprey.