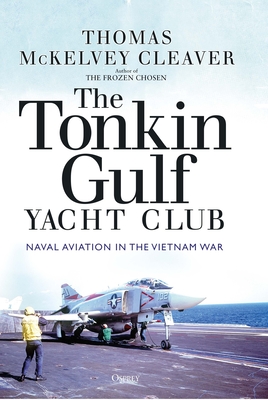 The "Tonkin Gulf Yacht Club" was the tongue-in-cheek nickname of the US Seventh Fleet that was stationed off the coast of Vietnam and this book tells the full story of the US Naval air campaign in the Vietnam War from 1965 to 1975.

On August 2, 1964, the USS Maddox became embroiled in the infamous Gulf of Tonkin incident that led directly to America's increased involvement in the Vietnam War. Supporting the Maddox that day were four F-8E Crusaders from the USS Ticonderoga, and this was the very start of the US Navy's commitment to the air war over Vietnam.

The Tonkin Gulf Yacht Club is titled after the nickname for the US Navy's Seventh Fleet which was stationed off the coast of Vietnam, and it tells the full story of the US Navy's war in the air. It details all the operations from the USS Maddox onwards through to the eventual withdrawal of the fleet following the collapse of South Vietnam in 1975.

The Seventh Fleet's Task Force 77, which at points during the war had as many as six carriers on station at any one time with 70–100 aircraft on each, provided vital air support for combat troops on the ground, while at the same time taking part in the major operations against North Vietnam itself such as Rolling Thunder, Linebacker I and II. All of these operations took place in a hostile environment of flak, missiles and MiGs.

The story is told through the dramatic first-hand accounts of those that took part in the fighting, with many of the interviews carried out by the author himself. The Vietnamese perspective is also given, with the author having had access to the official Vietnamese account of the war in the air. The author also has a personal interest in the story, as at the age of 20 he served with the US Seventh Fleet off the coast of Vietnam and was personally involved in the dramatic history of The Tonkin Gulf Yacht Club.

Thomas McKelvey Cleaver has been a published writer for the past 40 years, with his most recent work being the best-selling Osprey titles The Frozen Chosen (2016), Pacific Thunder (2017), Tidal Wave (2018), Holding the Line (2019), MiG Alley (2019), and I Will Run Wild (2020). He is also the author of Aces of the 78th Fighter Group and F4F Wildcat and F6F Hellcat Aces of VF-2, as well as Fabled Fifteen: The Pacific War Saga of Carrier Air Group 15 and The Bridgebusters: The True Story of the Catch-22 Bomb Group. During his 30 years as a screenwriter in Hollywood, he wrote the cult classic The Terror Within and worked as a supervising producer on a number of TV and cable series. He served in the US Navy in Vietnam and currently lives in Encino, California.

“The Vietnam War was my war, by which I mean I fought in it, and I can say that Thomas Cleaver in his Tonkin Gulf Yacht Club examines the war in an unparalleled way through the lens of aviation and its aviators. He illustrates the inevitable agony and sacrifice, thrill and triumph of the young men immersed in that saga. It all makes for a riveting read.” - Colonel Lawrence Wilkerson, US Army (Ret.), soldier, diplomat and late Professor of Government and Public Policy at the College of William and Mary

“Tom Cleaver has captured the dramatic history of Naval Aviation’s combat record in Vietnam in a manner worthy of the classic historical novel. From the first shot fired in the Tonkin Gulf in August 1964 to the final salvo in January 1973, Tom weaves an accurate tale, full of the color and fury of battle, courage, suspense, and thrill of victory – as experienced and portrayed on both sides of the conflict.” - Captain Roy Cash, Jr., USN (Ret.), Former CO, Top Gun

“Tom Cleaver’s book is a superb study of Naval Aviation's experiences during the Vietnam War. Tom’s in-depth focus and analysis of personal inputs from aircrews on both sides of the conflict coupled with the ever-changing political environment make it a high-powered book that is difficult to put down.” - Rear-Admiral James A. “Jim” Lair, USN (Ret.), former commanding officer, USS America

“With equal measures of aeronautical detail, historical perspective, and gripping action, Tom Cleaver has crafted an authoritative and balanced account of the Navy’s Vietnam air war. Readers will be amazed by the recall and revelations of the Naval Aviators interviewed, profiled and portrayed. This is a gripping narrative combined with a definitive historical and technical reference.” - David Sears, author of 'Such Men as These: The Story of the Navy Pilots Who Flew the Deadly Skies over Korea'

“The author does an outstanding job of highlighting both the shortcomings and triumphs of naval aviation during this period.” - New York Journal of Books