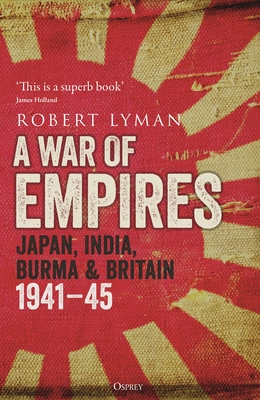 'This is a superb book.' - James Holland

In 1941 and 1942 the British and Indian Armies were brutally defeated and Japan reigned supreme in its newly conquered territories throughout Asia. But change was coming. New commanders were appointed, significant training together with restructuring took place, and new tactics were developed. A War of Empires by acclaimed historian Robert Lyman expertly retells these coordinated efforts and describes how a new volunteer Indian Army, rising from the ashes of defeat, would ferociously fight to turn the tide of war.

But victory did not come immediately. It wasn't until March 1944, when the Japanese staged their famed 'March on Delhi', that the years of rebuilding reaped their reward and after bitter fighting, the Japanese were finally defeated at Kohima and Imphal. This was followed by a series of extraordinary victories culminating in Mandalay in May 1945 and the collapse of all Japanese forces in Burma. The Indian Army's contribution has been consistently forgotten and ignored by many Western historians, Robert Lyman proves how vital this hard-fought campaign was in securing Allied victory in the east, defeating Japanese militarism and ultimately redrawing the map of the region with an independent India, free from the shackles of empire, all but guaranteed.

Robert Lyman is regarded as one of Britain's most talented military historians, with 15 best-selling works of history published and numerous television appearances including on the BBC's 'Who Do You Think You Are?' and on two episodes of the 'Great Escapes' documentary series, on Tobruk (1941) and Kohima (1944). He spent 20 years in the British Army and is an elected Fellow of the Royal Historical Society. A frequent traveller to the US, Asia and Australasia, he lives in England.
“This clear, in-depth account of the struggle between Japan, India, and Great Britain in Burma relates one of the most critical yet little known campaigns of the war. It is a large story, and the author succeeds in brining together its disparate details into a coherent narrative with clear conclusions and supporting information. The book's descriptions of persons, locations, and actions are vivid and engaging throughout its pages.” —WWII History