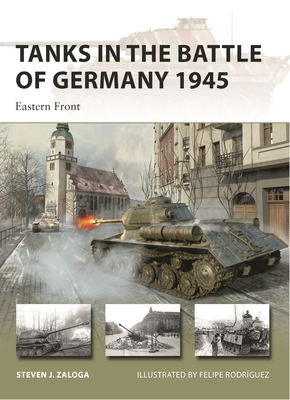 This is book number 312 in the New Vanguard series.

A new history and analysis of the German and Soviet tank forces that battled on eastern German soil in the final months of World War II.

The final months of World War II on the Eastern Front saw the Wehrmacht fighting with exhausted armoured divisions, albeit now armed with the most advanced and heaviest tanks of the war, to slow the Soviet advance. The Red Army meanwhile was rolling relentlessly westwards, with its own highly developed tank forces now equipped with T34/85s and the huge IS-2 heavy tanks, intent on taking Berlin and as much German territory as possible.

This book is a history and analysis of the state of these two mighty armoured forces, as their battles decided the fate of Germany. It covers their initial encounters on the German frontier in 1944 (East Prussia), the fighting of the Oder-Vistula offensive in January 1945 and describes the condition of the German tank forces and their Hungarian allies as they were beaten back. It also considers the huge impact of The Red Army and other significant Allied forces such as those from Poland, Czechoslovakia and Romania on the outcome of victory in the war.

Steven J. Zaloga received his BA in History from Union College and his MA from Columbia University. He has worked as an analyst in the aerospace industry for over three decades, covering missile systems and the international arms trade, and has served with the Institute for Defense Analyses, a federal think tank. He is the author of numerous books on military technology and military history, with an accent on the US Army in World War II as well as Russia and the former Soviet Union. He currently lives in Maryland.
"Photos show tanks and AFVs in various campaign locations, and top-notch artwork by Felipe Rodriguez. Recommended." - John Ham, Tankette