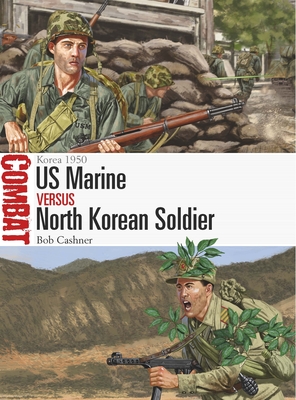 This absorbing study casts light on the tactics, weapons and combat effectiveness of the US Marines and North Korean soldiers who fought one another in August and September 1950.

Equipped with Soviet tanks and bolstered by a cadre of combat veterans returning from the Chinese Civil War, North Korea's army launched its surprise offensive against the Republic of Korea on 25 June 1950; within days Seoul had fallen and the majority of South Korea's divisions had been shattered. American ground troops rushed to Korea also seemed incapable of stopping the rapidly advancing North Koreans. By August, the remnants of the South Korean and US Army divisions had been pushed into a small corner around the port of Pusan, their backs to the sea. Time was also running out for the North Koreans; virtually all of their planning and preparations were based on a two-month campaign. Although the North Korean People's Army had enjoyed an impressive string of victories, its losses were no longer being replaced in the needed quantity or quality. It was truly a do-or-die moment for both sides.

In the wake of World War II, the United States Marine Corps had shrunk from 473,000 men in 1945 to only 70,000 in 1950. Despite its heavily slashed budget and manpower, the Marine Corps responded swiftly and decisively. Active-duty Marines from all over the globe gathered and for once the Marine Corps even received some of the latest American military equipment; it was the Marines' esprit de corps that made the real difference, however. Using first-hand accounts and specially commissioned artwork, this study assesses the KPA and US Marine Corps troops participating in three crucial battles – Hill 342, the Obong-Ni Ridge and the Second Battle of Seoul – to reveal the tactics, weapons and combat effectiveness of both sides' fighting men in Korea in 1950.