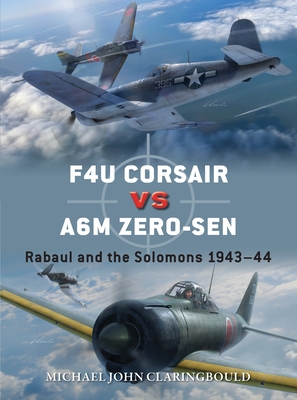 The aerial clashes between the iconic Corsair and Zero-sen translated into a contest of speed and altitude for the former, versus the latter's outstanding agility and range.

Whilst the F4U Corsair eventually proved to be a superior fighter in Pacific operations, its introduction into combat in this theatre initially demonstrated its weaknesses. Indeed, the 'Saint Valentine's Day Massacre' debacle showcased exemplary Zero-sen fighter tactics, and American losses were of sufficient magnitude that further daylight missions toward Bougainville were discontinued until Allied fighter tactics could be improved. As a result, for the next two months the Corsair's combat results were much subdued. Indeed, the F4U only became a superb fighter when both its pilots and their commanders worked out how to deploy the gull-wing design effectively. Optimum circumstances for effective engagement did not always occur, and the Zero-sen remained effective against the Corsair until February 1944 in the South Pacific, after which all IJNAF fighter units vacated Rabaul. This book closely examines these two different fighters in the Solomons/Rabaul theatre, and the unique geographic conditions which shaped their deployment and effectiveness. It contains rare photographs and digital artwork that accurately showcases and aligns combats of both types in-theatre with unprecedented accuracy. Both sides vastly over-claimed. With full access to IJNAF and US Navy/US Marine Corps records, these numbers will be presented accurately.

Michael John Claringbould was raised in Papua New Guinea, where he became fascinated by the Pacific air war. An extensive career in the Australian Foreign Service saw him complete six postings within Asia and the Pacific. He is author of numerous books concerning the USAAF Fifth Air Force and Japanese Pacific air power. Appointed an executive member of Pacific Air War History Associates in 2018, Michael is a licensed pilot and also holds an Intermediate paraglider rating. He lives in Australia.