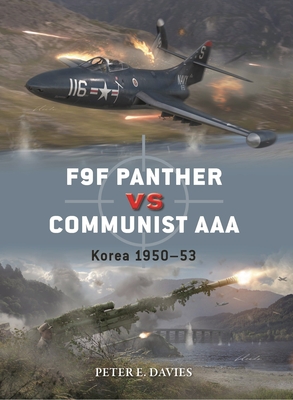 A detailed look at the deadly battle between US Navy F9F Panther jet fighter-bombers and communist anti-aircraft artillery (AAA) defenses that proliferated throughout the Korean War.

The F9F Panther was one of the many fighters converted for ground-attack duties, following an established US tradition. Originally designed as a jet fighter, in April 1951 it became the first jet to launch from a carrier with bombs loaded, using them to destroy a crucial railway bridge at Songjin. The Panther's four 20 mm guns were considered to be very effective for flak suppression and these aircraft were used as escorts for propeller-driven AD Skyraider and F4U Corsair attack aircraft. However, later in 1951, flak damage to Panthers increased as the Chinese established better AAA weapons to defend key transport routes. The communist AAA crews had heavy guns of 37 mm caliber and above. Gunners could use optical height finders, predictors and in many cases radar control. They learned to conceal their weapons in civilian buildings, use wires to bring aircraft down, and set up false targets as "flak traps."

Both opponents' tactics and gunnery are explored in depth in this study of the F9F Panthers and of their adversaries. Containing full-color illustrations including cockpit scenes and armament views, this innovative volume also includes a detailed analysis of the US Navy Panthers' loss rates and their causes.

Peter E. Davies has published over 30 books for Osprey. He has specialized in the aircraft of the Vietnam and Cold War periods, analyzing tactics, background politics and technologies in combat situations. Original first-hand interviews and unpublished illustrative material are a hallmark of his work. He has often sought to explore specific military incidents from past conflicts. Peter has also been a contributor to publications such as Aeroplane Monthly, Aviation News and Aircraft Illustrated.