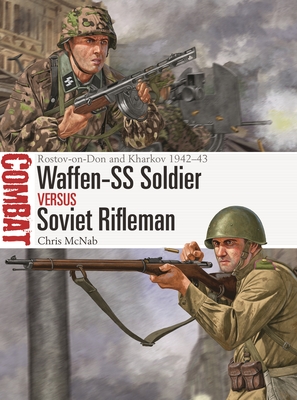 Fully illustrated, this study assesses the Soviet and Waffen-SS troops who contested the cities of Kharkov and Rostov-on-Don on the Eastern Front during 1942–43.

In this book, Chris McNab examines the fighting men of the Red Army and the Waffen-SS who clashed in three battles – one for Rostov (July 1942) and two for Kharkov (February–March and August). He clearly explains the key differences between these two opponents – training, tactics, weaponry, ideology and motivation – and examines how these differences played out in the three engagements, which ranged from open-terrain combined-arms battles to close-quarters street fighting in major urban zones. The text is complemented by specially commissioned artwork and mapping and carefully chosen archive photographs.

Dr Chris McNab specializes in military history and related technology. To date he has published more than 100 books including US Soldier vs German Soldier (2020), Hitler's Tanks (2020) and The Great Bear at War (2019). Chris has also written extensively for major encyclopaedia series, magazines and newspapers. He lives in South Wales, UK.