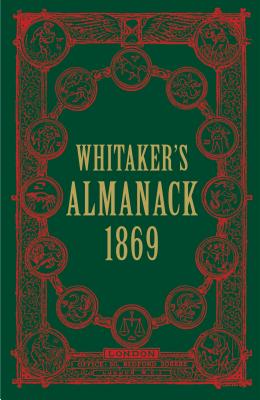 'The Almanack is essentially a Household Book. From it is derived the knowledge ordinarily possessed of the Course of the Seasons, and other Astronomical phenomena, the nature of our Constitution, and the statistics of our Ecclesiastical, Legal, Naval, and Military systems. In addition to all such information, herein given in an unusually full and complete manner, the reader will discover other and important features not hitherto easily obtainable. He is referred, for instance, to the summaries of the Public Income and Expenditure, the proceedings of Parliaments during the last Session; to Scientific Discoveries and Inventions of the Year; to the Trade, Commerce, and Finance of the Kingdom; and to the particulars of our Municipal and Social Institutions...a clear and concise account of India, Australia, Canada and other possessions, together with a similar description of Foreign Countries' (December 10, 1868)

So wrote Joseph Whitaker in the introduction to his very first edition of Whitaker's Almanack, published in 1868. One hundred and forty six years later Whitaker's is still published annually and its remit has remained remarkably unchanged. Alongside the calendar and astronomical data associated with an almanack, it provides a comprehensive overview of all aspects of UK infrastructure, a detailed digest of every country of the world and an overview of the events and discoveries of the past year.

Joseph Whitaker was born in 1820 the son of a silversmith, and began his career in books at an early age as an apprentice at Parker's, a scholarly bookshop in Oxford. During the 1850s, he was an editor at The Gentleman's Magazine in charge of the correspondence pages. This required him to answer a selection of reader's questions that were notoriously broad in their scope, and Whitaker consequently accumulated a substantial collection of invaluable newspaper cuttings, government statistics and questions and answers from a variety of sources.In addition to his work at The Gentleman's Magazine, he founded and edited The Bookseller, also finding time to marry twice and father 13 children. It was his growing number of financial dependants that prompted his decision to publish his collection of facts as an almanack.