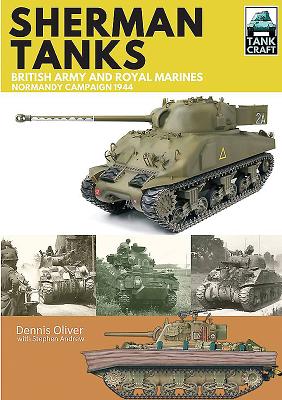 This is book number 2 in the Tankcraft series.

With production in excess of 55,000 the Sherman tank was eventually in service with most Allied armies of the Second World War and by the time of the Normandy landings was the mainstay of Britain's armored battalions. In his second book in the TankCraft series, Dennis Oliver uses wartime photos and extensively researched, exquisitely presented color illustrations to cover the Sherman tanks used by the units of the Royal Armoured Corps and the Royal Marines during the fighting in northern France. As with all the books in the TankCraft series, a large part of this work showcases available model kits and aftermarket products, complemented by a gallery of beautifully constructed and painted models in various scales. Technical details as well as modifications introduced during production and in the field are also explained as is the complex system of markings employed by British armored regiments. This book will give the modeler all the information and knowledge required to recreate an authentic miniature representation of the tanks that fought from the beaches of Normandy, through the battles for Caen and on to killing fields of Falaise.