Tiger I and Tiger II: Tanks of the German Army and Waffen-SS: Eastern Front 1944 (Tankcraft #1) (Paperback) 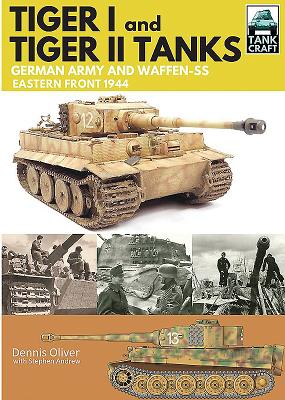 Tiger I and Tiger II: Tanks of the German Army and Waffen-SS: Eastern Front 1944 (Tankcraft #1) (Paperback)

This is book number 1 in the Tankcraft series.

In spite of the relatively small numbers produced, the Tiger I and Tiger II tanks are arguably the most famous armored fighting vehicles of the Second World War. This book, the first in the TankCraft series, uses archive photos and extensively researched color illustrations to examine the tanks and units of the German Army and Waffen-SS heavy panzer battalions that attempted to hold back the Red Army during 1944. A large part of the book showcases available model kits and after market products, complemented by a gallery of beautifully constructed and painted models in various scales. Technical details as well as modifications introduced during production and in the field are also examined providing everything the modeler needs to recreate an accurate representation of the tanks that fought from the snow covered fields of Byelorussia and the Ukraine, through the Baltic States and into Poland and Hungary.