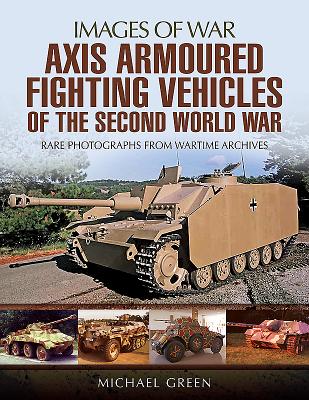 
Special Order—Subject to Availability
During the Second World War the Axis powers, most prolifically the Germans, deployed a vast array of armored fighting vehicles to support their tanks and infantry. These included tank destroyers, reconnaissance vehicles, flame-thrower vehicles, and self-propelled artillery pieces. Armored tank destroyers, such as the Marder series, the Nashorn, Jagdpanther, Jagdtiger and the turretless German Stu III series (based on the Panzer III medium tank), helped the Nazis overcome their shortage of tanks. Copying the Stu III series the Italians created the turretless Semovente da 75/18 assault gun and the Hungarians the turretless Zrinyi. In the role of self-propelled artillery the German fielded the Hummel, the Wespe and the Grille while the Brummbar and the Sturmtiger performed in the dedicated assault gun role.
For armored reconnaissance German industry came up with a series of capable armored cars; examples were the eight-wheel Puma and the full-tracked Luchs reconnaissance tank. The Italians developed the impressive four-wheel Autoblinda armored cars. Specialized antiaircraft tanks such the Mobelwagen, Wirbelwind and the Ostwind gave some protection against the ever more powerful Allied air forces. This fine book covers all these variants and many more besides in words and rare images and will delight readers, collectors, model-makers and war-gamers.