Sensational Internationalism: The Paris Commune and the Remapping of American Memory in the Long Nineteenth Century (Edinburgh Critical Studies in Atlantic Literatures and Cultu) (Paperback) 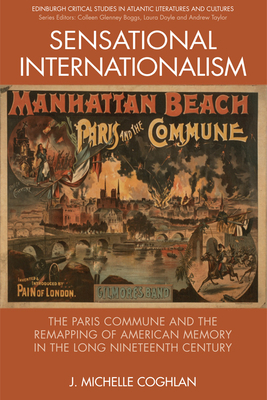 Sensational Internationalism: The Paris Commune and the Remapping of American Memory in the Long Nineteenth Century (Edinburgh Critical Studies in Atlantic Literatures and Cultu) (Paperback)

Remaps the borders of transatlantic feeling and resituates the role of international memory in U.S. culture in the long nineteenth century and beyond

In refocusing attention on the Paris Commune as a key event in American political and cultural memory, Sensational Internationalism radically changes our understanding of the relationship between France and the United States in the long nineteenth century. It offers fascinating, remarkably accessible readings of a range of literary works, from periodical poetry and boys' adventure fiction to radical pulp and the writings of Henry James, as well as a rich analysis of visual, print, and performance culture, from post-bellum illustrated weeklies and panoramas to agit-prop pamphlets and Coney Island pyrotechnic shows. This book will speak to readers looking to understand the affective, cultural, and aesthetic afterlives of revolt and revolution pre-and-post Occupy Wall Street, as well as those interested in space, gender, performance, and transatlantic print culture.

J. Michelle Coghlan teaches American literature at the University of Manchester, UK. Her work on cultural memory, sensation, queer economies of desire, and American literature of the long nineteenth century has appeared in journals and edited books, including Arizona Quarterly, The Henry James Review, Transforming Henry James and Must Read: Rediscovering American Bestsellers. She recently guest edited the "Tasting Modernism" special issue of Resilience: A Journal of the Environmental Humanities.