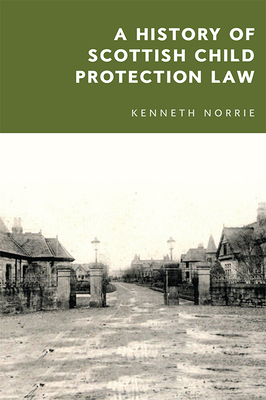 The first comprehensive account of how the law and practice of child protection in Scotland has developed from its earliest origins to the present day, within the context of a changing world

Kenneth Norrie traces the assumptions that underlay child protection law at particular periods of time and identifies the pressures for change - giving a clearer understanding of how and why the contemporary law is designed and operates as it does.

Particular issues are traced in legislative detail, including court processes, the changing thresholds for state intervention, the increasing regulation of children's homes and foster care, the developing rules on corporal punishment and the earlier practice of compulsory emigration to the colonies of children removed from their parents.

The transformation of adoption is also covered in comprehensive detail. In drawing out key themes and common threads, Norrie sets contemporary developments against their historical context and offers a fuller understanding of child protection law in Scotland.

Kenneth Norrie is Professor of Law at Strathclyde Law School. He has taught Family Law for over 20 years, both in Scotland and abroad and has written many of the major textbooks on the subject, as well as numerous articles on child protection and same-sex families. He has advised the Scottish Parliament on most of its recent family law legislation and was a member of the children's panel for ten years.