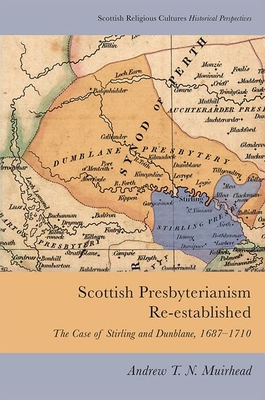 In 1690, the Church of Scotland rejected episcopal authority and settled as Presbyterian. The adjacent Presbyteries of Stirling and Dunblane covered an area that included both lowland and highland communities, speaking both English and Gaelic and supporting both the new government and the old - thus forming a fairly representative picture of the nation as a whole. This book will examine the ways in which the two Presbyteries operated administratively, theologically and geographically under the new regime. By surveying the complete indices of surviving church records from 1690 to 1710 at Presbytery and parish level, Andrew Muirhead will show how the two Presbyteries related to civil authorities, how they dealt with problematic discipline cases referred by the Kirk Sessions and their overall functioning as human, as well as religious, institution in seventeenth-century Scotland. The resulting study will advance our understanding of the profound impact that Presbyteries had on those involved with them in any capacity.

Compares the new Presbyterian regime and the Calvinist Episcopalianism it replaced; Examines church records available in Stirling Archives (e.g. recruitment records and header texts of the week-to-week preaching of ministers), civil records (e.g. hearth tax, burgh and guildry records) as well as memoirs and diaries; Provides statistical analysis of the recruitment and experiences of new ministers, their relationships with each other and heritors; Forms the backdrop for the origins of the First Secession in Stirling 30-40 years later.
Andrew T. N. Muirhead is an independent researcher, former President of the Scottish Church History Society and a former Deputy Clerk at the Presbytery of Stirling. He has been indexing church records in Stirling for 10 years and is the author of Reformation, Dissent and Diversity: The Story of Scotland's Churches, 1560-1960 (2015).