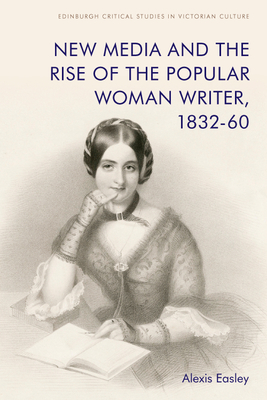 This book highlights the integral relationship between the rise of the popular woman writer and the expansion and diversification of newspaper, book and periodical print media during a period of revolutionary change, 1832-1860. It includes discussion of canonical women writers such as Felicia Hemans, Charlotte Bront and George Eliot, as well as lesser-known figures such as Eliza Cook and Frances Brown. It also examines the ways women readers actively responded to a robust popular print culture by creating scrapbooks and engaging in forms of celebrity worship. Easley analyses the ways Victorian women's participation in popular print culture anticipates our own engagement with new media in the twenty-first century.

Alexis Easley is Professor of English at the University of St. Thomas in St. Paul, Minnesota. She is the author of First-Person Anonymous: Women Writers and Victorian Print Media, 1830-70 (Ashgate, 2004) and Literary Celebrity, Gender, and Victorian Authorship, 1850-1914 (Delaware UP, 2011). She co-edited The Routledge Handbook to Nineteenth-Century Periodicals and Newspapers and Researching the Nineteenth-Century Periodical Press: Case Studies (Routledge, 2016 & 2017, both recipients of the Colby Prize), with Andrew King and John Morton. Her third essay collection, Women, Periodicals, and Print Culture in Britain, 1830s-1900s, co-edited with Clare Gill and Beth Rodgers, was published by Edinburgh University Press in 2019. Her current book project is titled New Media and the Rise of the Popular Woman Writer, 1832-60 (forthcoming, Edinburgh University Press, 2021). This project was a 2019 recipient of the Linda H. Peterson Prize awarded by the Research Society for Victorian Periodicals.