King Arthur and Robin Hood on the Radio: Adaptations for American Listeners (Paperback) 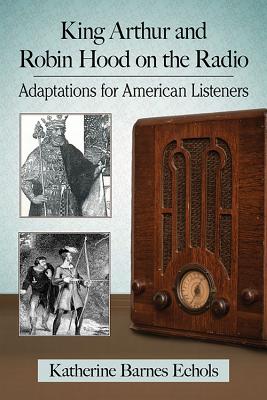 King Arthur and Robin Hood on the Radio: Adaptations for American Listeners (Paperback)


Not On Our Shelves—Ships in 1-5 Days
Before stories of King Arthur and Robin Hood were adapted and readapted for film, television and theater, radio scriptwriters looking for material turned to Thomas Malory's Le Morte Darthur (1485) and Howard Pyle's The Merry Adventures of Robin Hood (1883). Throughout the 1930s to the mid-1950s, their legends inspired storylines for Abbott and Costello, Popeye, Let's Pretend, Escape, Gunsmoke, The Adventures of Superman and others. Many of these adaptations reflect the moral and ethical questions of the day, as characters' faced issues of gender relations, divorce, citizenship, fascism, crime and communism in a medieval setting.
Katherine Barnes Echols teaches at Texas A&M University at Galveston. Her areas of interest include adaptation theory and American radio productions from the 1930s through the 1950s as cultural artifacts.