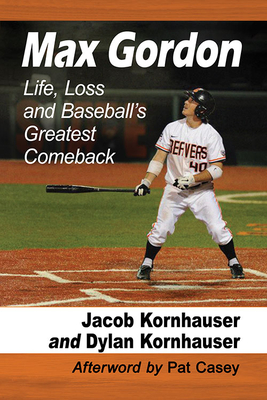 
Not On Our Shelves—Ships in 1-5 Days
A left-handed batter in the NCAA's Division 1, Max Gordon still had a lot to live for, provided he would live at all. Facing a devastating loss--the death of his brother, Nick--and a life-threatening physical injury, he went on a transformative personal journey that united his family through the most difficult time they had ever faced. In this intimate narrative about the healing power of sports, a family is made whole again through the determination of a son who proves that in life as in baseball, no matter the score, as long as you have one more at bat, you're still in the game. The authors tell the story from the perspective of having shared relationships with the Gordon brothers.
Jacob Kornhauser is a student at Duke Law School. He is a former television and digital video producer at FOX Sports and ESPN as well as a local TV sports anchor in Medford, Oregon. Dylan Kornhauser was a Presidential Scholar at the University of Alabama and is now an international scholar living in Paris, France, where he studies philosophy at the American University of Paris.