The Second Kind of Impossible: The Extraordinary Quest for a New Form of Matter (Paperback) 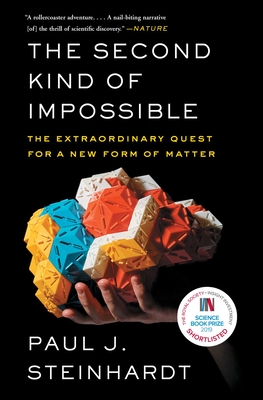 The Second Kind of Impossible: The Extraordinary Quest for a New Form of Matter (Paperback)

One of the most fascinating scientific detective stories of the last fifty years, an exciting quest for a new form of matter. “A riveting tale of derring-do” (Nature), this book reads like James Gleick’s Chaos combined with an Indiana Jones adventure.

When leading Princeton physicist Paul Steinhardt began working in the 1980s, scientists thought they knew all the conceivable forms of matter. The Second Kind of Impossible is the story of Steinhardt’s thirty-five-year-long quest to challenge conventional wisdom. It begins with a curious geometric pattern that inspires two theoretical physicists to propose a radically new type of matter—one that raises the possibility of new materials with never before seen properties, but that violates laws set in stone for centuries. Steinhardt dubs this new form of matter “quasicrystal.” The rest of the scientific community calls it simply impossible.

The Second Kind of Impossible captures Steinhardt’s scientific odyssey as it unfolds over decades, first to prove viability, and then to pursue his wildest conjecture—that nature made quasicrystals long before humans discovered them. Along the way, his team encounters clandestine collectors, corrupt scientists, secret diaries, international smugglers, and KGB agents. Their quest culminates in a daring expedition to a distant corner of the Earth, in pursuit of tiny fragments of a meteorite forged at the birth of the solar system.

Steinhardt’s discoveries chart a new direction in science. They not only change our ideas about patterns and matter, but also reveal new truths about the processes that shaped our solar system. The underlying science is important, simple, and beautiful—and Steinhardt’s firsthand account is “packed with discovery, disappointment, exhilaration, and persistence...This book is a front-row seat to history as it is made” (Nature).
Paul J. Steinhardt is the Albert Einstein Professor in Science at Princeton University, where he is on the faculty of both the departments of Physics and Astrophysical Sciences. He cofounded and directs the Princeton Center for Theoretical Science. He has received the Dirac Medal and other prestigious awards for his work on the early universe and novel forms of matter. He is the author of The Second Kind of Impossible, and the coauthor of Endless Universe with Neil Turok, which describes the two competing ideas in cosmology to which he contributed. With his student, Dov Levine, Steinhardt first invented the theoretical concept of quasicrystals before they were synthesized in a laboratory. More than three decades later, with Luca Bindi, he guided the team that led to the discovery of three different natural quasicrystals in the Kamchatka Peninsula. In 2014, the International Mineralogical Association named a new mineral “steinhardtite” in his honor.
“A rare and compulsively readable blend of science and thriller, The Second Kind of Impossible tells of the quest to find a new type of matter that would rewrite the rules of reality. Paul Steinhardt, one of the world's leading theoretical physicists, takes readers on a wondrous odyssey across multiple decades and continents as, against all odds, he helps to topple scientific orthodoxy.”
—Brian Greene, author of The Elegant Universe

“Scientists, smugglers, and spies—this book is an exciting and enlightening scientific detective story. The tale is about far more than a new form of matter; it is also a thrilling and wonderfully written look at how science works.”
—Walter Isaacson, author of Einstein

“An epic account of two scientific triumphs: a thirty-year theoretical search for understanding and a real-world expedition into the wilds of Kamchatka. It is as if The Origin of Species and The Voyage of the Beagle had been published together in one volume.”
—Freeman Dyson, author of Maker of Patterns

“A truly amazing adventure story, full of twists and turns, right up to the very end. It has my strongest recommendation.”
—Sir Roger Penrose, author of The Emperor’s New Mind

“An intriguing blend of science and international adventure. [Steinhardt] takes readers on a wild ride in search of a new kind of matter…full of intrigue and adventure, culminating with the epic Kamchatka journey....A general audience can and should enjoy this original, suspenseful true-life thriller of science investigation and discovery.”
—Publishers Weekly

“A gripping scientific quest…an admirable popular account of the quasicrystal, an oddball arrangement of atoms that seems to contradict scientific laws.…Steinhardt [is] a pioneer in the field and a fine writer.”
—Kirkus Reviews

"[A] memoir and rollercoaster adventure, packed with discovery, disappointment, exhilaration and persistence...This book is a front-row seat to history as it is made."
—Nature Magazine

"Part physics primer, part fantastic adventure...Steinhardt’s affection and admiration for the journey’s colorful cast of characters infuse every page. Although his excitement is palpable, he is also careful and methodical, often reminding himself that he could be wrong. The Second Kind of Impossible shows the benefit of a slow and steady approach to science, where determination and luck are just as important as insight."
—Science News

"A rip-roaring adventure tale...a book that I could not put down because it was fast-paced and had genuine surprises in every chapter. Steinhardt deserves his place on the A-list."
—Physics World