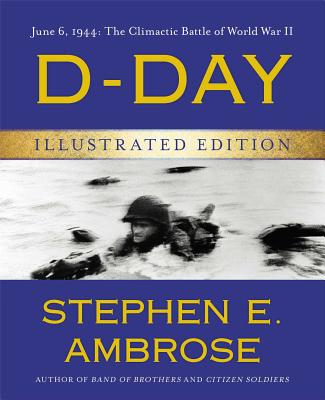 
Not On Our Shelves—Ships in 1-5 Days
Now illustrated with an extraordinary collection of over 125 photos, Stephen E. Ambrose’s D-Day is the definitive history of World War II’s most pivotal battle, June 6, 1944, the day that changed the course of history.

D-Day is the epic story of men at the most demanding moment of their lives, when the horrors, complexities, and triumphs of life are laid bare. Distinguished historian Stephen E. Ambrose portrays the faces of courage and heroism, fear and determination—what Eisenhower called “the fury of an aroused democracy”—that shaped the victory of the citizen soldiers whom Hitler had disparaged.

Drawing on more than 1,400 interviews with American, British, Canadian, French, and German veterans, Ambrose reveals how the original plans for the invasion had to be abandoned, and how enlisted men and junior officers acted on their own initiative when they realized that nothing was as they were told it would be.

The action begins at midnight, June 5/6, when the first British and American airborne troops jumped into France. It ends at midnight, June 6/7. Focusing on those pivotal twenty-four hours, the book moves from the level of Supreme Commander to that of a French child, from General Omar Bradley to an American paratrooper, from Field Marshal Montgomery to a German sergeant. Ambrose’s D-Day is the most honored account of one of our history’s most important days.
Stephen E. Ambrose was a renowned historian and acclaimed author of more than thirty books. Among his New York Times bestsellers are Nothing Like It in the World, Citizen Soldiers, Band of Brothers, D-Day - June 6, 1944, and Undaunted Courage. Dr. Ambrose was a retired Boyd Professor of History at the University of New Orleans and a contributing editor for the Quarterly Journal of Military History.
“D-Day is mostly about people, but goes even further in evoking the horror, the endurance, the daring and indeed, the human failings at Omaha Beach... Outstanding.”
— The New York Times Book Review

“Packed with drama and information, never losing sight of the horrors of combat, Ambrose's D-Day is the best book yet on what many historians consider to be the most important day of the twentieth century.”
— San Francisco Chronicle

“Historians and public alike should be profoundly grateful to Ambrose...for assembling this comprehensive and permanent record that will be forever a resource for remembering Normandy.”
— Chicago Tribune

“Ambrose's account of the D-Day fighting on the Normandy beaches and bluffs is unsurpassed for detail, emotion and suspense.”
— Publishers Weekly