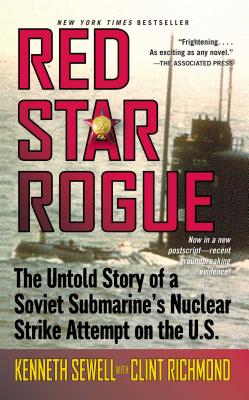 
Not On Our Shelves—Ships in 1-5 Days
This riveting New York Times bestseller tells of the shocking true story of a rogue Soviet submarine poised for a nuclear strike on the United States, “reveal[ing] the explosive facts about one of the best-kept secrets of the Cold War” (The Flint Journal).

On March 7, 1968, several hundred miles northwest of Hawaii, the nuclear-armed K-129 surfaced and sunk, taking its crewmen and officers with it to perish at sea. Who was commanding the rogue Russian sub? What was its target? How did it infiltrate American waters undetected?

Drawing from recently declassified documents and extensive confidential interviews, Navy veteran Kenneth Sewell exposes the stunning truth behind an operation calculated to provoke war between the United States and China.

With full, authoritative detail and sixteen pages of exclusive photographs, Red Star Rogue illuminates this history-shaping event and rings with chilling relevance in light of today’s terrorist threats.
Kenneth R. Sewell is a nuclear engineer and a US Navy veteran who spent five years aboard the USS Parche, a fast attack submarine that was the Navy’s most decorated ship. The USS Parche conducted a number of special operations. In addition to All Hands Down, he is the author of the New York Times bestseller Red Star Rogue, and Blind Man’s Bluff. He lives in Columbus, Ohio.

Clint Richmond is a veteran journalist and author based in Austin, Texas. His book Selena!, about the murder of the legendary Tejana singer, was a #1 bestseller.