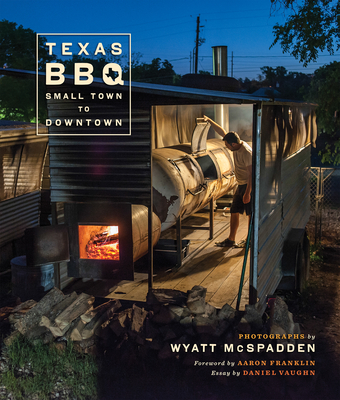 In Texas BBQ, Wyatt McSpadden immortalized the barbecue joints of rural Texas in richly authentic photographs that made the people and places in his images appear as timeless as barbecue itself. The book found a wide, appreciative audience as barbecue surged to national popularity with the success of young urban pitmasters such as Austin’s Aaron Franklin, whose Franklin Barbecue has become the most-talked-about BBQ joint on the planet. Succulent, wood-smoked “old school” barbecue is now as easy to find in Dallas as in DeSoto, in Houston as in Hallettsville. In Texas BBQ, Small Town to Downtown, Wyatt McSpadden pays homage to this new urban barbecue scene, as well as to top-rated country joints, such as Snow’s in Lexington, that were under the radar or off the map when Texas BBQ was published.

Texas BBQ, Small Town to Downtown presents crave-inducing images of both the new—and the old—barbecue universe in almost every corner of the state, featuring some two dozen joints not included in the first book. In addition to Franklin and Snow’s, which have both occupied the top spot in Texas Monthly’s barbecue ratings, McSpadden portrays urban joints such as Dallas’s Pecan Lodge and Cattleack Barbecue and small-town favorites such as Whup’s Boomerang Bar-B-Que in Marlin. Accompanying his images are barbecue reflections by James Beard Award–winning pitmaster Aaron Franklin and Texas Monthly’s barbecue editor Daniel Vaughn. Their words and McSpadden’s photographs underscore how much has changed—and how much remains the same—since Texas BBQ revealed just how much good, old-fashioned ’cue there is in Texas.

The photographer/author of Texas BBQ, Wyatt McSpadden has been shooting pictures of Texas barbecue joints for more than twenty-five years. He is a contributing photographer for Texas Monthly, in which he has published images of virtually every aspect of life in Texas

The barbecue editor of Texas Monthly since 2013, Daniel Vaughn is the author of The Prophets of Smoked Meat: A Journey Through Texas Barbecue.

Texas BBQ, Small Town to Downtown, takes us to a few slick urban spots, but it’s the out-of-the-way places that will likely stir more than an appetite in readers—they’ll stir a sense of adventure too.
— Texas Monthly

[A] large-format book so steeped in barbecue traditions that it might leave a smoke ring on your coffee table.
— Houston Chronicle

Each photo caption includes the population of the town where the barbecue joints resides to provide an unusual but helpful bit of context. . . It's great to see big city upstarts. . . featured right alongside some of McSpadden's new small town discoveries.
— Texas Monthly

Ain't a thing on the planet, when it's photographed by this McSpadden, that won't look even more awesome than it does outside of his expert lens.
— Austin Chronicle

This is a history of the contemporary barbeque scene that displays coffee table quality. You'll want to leaf through and ponder the flavors of the blackened meats on display. And you'll probably want to plot a journey to sample some of these establishments.
— Cooking by the Book

This is a true coffee table book that will make you hungry and ready to take a road trip with every turn of the page.
— My San Antonio

Texas BBQ is a colorful, updated photographic tour by barbecue lover Wyatt McSpadden, and it will make you want to visit the 48 establishments pictured in the coffee table volume.
— Abilene Reporter-News