Far From Respectable: Dave Hickey and His Art (Hardcover) 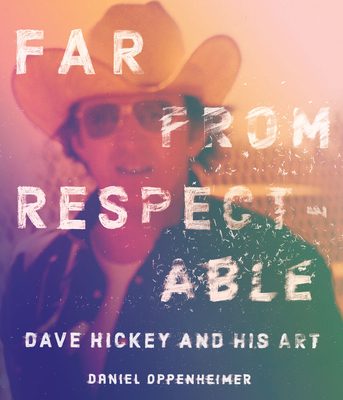 Far From Respectable: Dave Hickey and His Art (Hardcover)

Regarded as both a legend and a villain, the critic Dave Hickey has inspired generations of artists, art critics, musicians, and writers. His 1993 book The Invisible Dragon became a cult hit for its potent and provocative critique of the art establishment and its call to reconsider the role of beauty in art. His next book, 1997’s Air Guitar, introduced a new kind of cultural criticism—simultaneously insightful, complicated, vulnerable, and down-to-earth—that propelled Hickey to fame as an iconoclastic thinker, loved and loathed in equal measure, whose influence extended beyond the art world.

Far from Respectable is a focused, evocative exploration of Hickey’s work, his impact on the field of art criticism, and the man himself, from his Huck Finn childhood to his drug-fueled periods as both a New York gallerist and Nashville songwriter to, finally, his anointment as a tenured professor and MacArthur Fellow. Drawing on in-person interviews with Hickey, his friends and family, and art world comrades and critics, Daniel Oppenheimer examines the controversial writer’s distinctive takes on a broad range of subjects, including Norman Rockwell, Robert Mapplethorpe, academia, Las Vegas, basketball, country music, and considers how Hickey and his vision of an “ethical, cosmopolitan paganism” built around a generous definition of art is more urgently needed than ever before.

Daniel Oppenheimer is is the author of Exit Right: The People Who Left the Left and Reshaped the American Century. He has written for the Washington Post, The Atlantic, Slate, Washington Monthly, Texas Monthly, Guernica, and The New Republic, among others.
Far from Respectable is a worthy introduction to the writing of a major American critic and should instill a desire to experience Hickey’s delights firsthand.
— Washington Post

[Far from Respectable] offers a coherent trajectory of a writer, from the childhood tragedy, to his lost years of drug use among the Nashville’s outlaw singers, to later-life prominence and tenure in Las Vegas (the town that best suited Hickey’s free-spirited nature). Above all, it has the salutary effect of reminding us of Hickey as an artist; instead of a gadfly, Hickey might be seen as a critical object himself, with a body of work worth experiencing.
— The Nation

Oppenheimer has written a poetic distillation of Hickey's art in America, the broken cowboy, and the cowering broker...In going back to the author's initial two questions: Is Dave Hickey worth the hype, and should anyone give a hoot? Far From Respect­able, like the wandering iconoclast it follows, deserves nothing but respect.
— Austin Chronicle

[Far from Respectable is] neither a biography, a cultural history, nor a sustained assessment, although it has elements of each. It also features reporting and literary criticism, as well as autobiographical elements. Oppenheimer employs these materials as a dioramist might, reconstructing a few specific periods—Nashville in the 1970s, the culture wars of the 1990s—to illuminate his thesis: that much of Hickey’s writing transcends criticism to approach the status of art.
— Alta Journal

Far from Respectable is the first book about Hickey,...but it won’t be the last. Any book in which one author writes about another writer can quickly sour into a competition between the subject’s writing and the author’s writing about it. Oppenheimer spares readers—and himself—such indignities, bringing clear-eyed insights and a straightforward voice to his explorations and explanations of Hickey’s life and work...If there will be many more books about Hickey and his philosophy of beauty, then they’ll have to be very good to get over the high bar that Oppenheimer sets.
— Burnaway

Oppenheimer...is a skilled biographer. He is unusually sensitive to the winding paths by which our private pleasures shape, resist, mar, and undo our public political and moral commitments...As he recounts his subject’s life and contemporary relevance, Oppenheimer stages his own enjoyment of Hickey with such lucid warmth that he seems to substantiate Hickey’s insistence that our enjoyment of art entangles us in other human loves...Far From Respectable succeeds in proving, through its reader’s own pleasure, the truth of Hickey’s vision of art as an experience that opens the self toward others.
— Tablet Magazine

[An] engaging study of the idiosyncratic critic…[Oppenheimer] combines gumshoe reporting, interviews with figures in Hickey’s life, as well as plenty of fan service nuggets, and the result is a short book that both humanizes Hickey and burnishes the mystique.
— Full Stop

Framed as a twilight reappraisal of Hickey’s life and work, [Far from Respectable's] main task is to pull Hickey’s criticism from its pigeonhole in the art world of the 1990s and into wilder, thornier, more human thickets of desire...while he praises Hickey’s writings as art, Oppenheimer also asks the pertinent question: is Hickey’s criticism still relevant? This is where the book gets relevant too...Engaging with beauty makes our lives richer—if it does anything at all—and Oppenheimer finds Hickey beautiful...there are moments when the whole thing sings.
— Art in America

Far From Respectable: Dave Hickey and His Art is definitive...The book delivers insightful, detailed overviews of Hickey’s biography—from boyhood in post-war Texas, to NYC gallerist, to premiere art critic and cultural provocateur—and his career highlights: written, lauded, vilified...[Oppenheimer's] work is smart and lovely, and in service to his groundbreaking subject, while keeping readers in mind. The biographer understands art, theory, culture, craft, and Hickey, and, importantly, doesn’t punish us when we don’t. (Which is often.)
— Southwest Review

Oppenheimer neatly dissects Hickey’s argument that defending provocative art against censorship by shouting 'free speech' misses the point: It’s the power of the artwork, or its 'beauty,' that should be defended because that’s what got the censors so riled up in the first place...In encouraging us to defend our loves—and by doing it himself—Hickey, along with Oppenheimer, defend our fragile, and increasingly illiberal, democracy. Hickey couldn’t be more relevant than that.
— KNPR's "Fifth Street"

[A] slender but finely crafted and brilliantly sensitive book...Far from Respectable is a wonderful book that provides the most eloquent explanation of Hickey you’ll ever have the pleasure to read.
— The University Bookman

Penetrating the ruse of his subject’s impish provocations, and fully understanding the power of critical thought, Oppenheimer builds a solid argument for revisiting Hickey’s books—not only because they contain some of the best-ever Anglophone writing on art, but also because we badly need Hickey’s evaluation of the 1990s to help us survive the culture of the 2020s...Far From Respectable makes an excellent case for reading Dave Hickey again.
— Athenaeum Review

[Dave Hickey's] writings are a contentious takedown of the art establishment and they encourage us to rethink out relationship to beauty. [Far from Respectable] traces the history of this unique mind and his impact on art and writing.
— Artnet

[Oppenheimer] makes a solid case for why we need to read and reread Hickey now: not only did he produce some of the best English-language essays on art and culture of the last century, but in our times those writings have proved themselves more prescient than ever.
— The New Criterion

[A] loving biography of the late critic.
— Fort Worth Weekly

In Far From Respectable: Dave Hickey and His Art, Daniel Oppenheimer complicates the cartoon version of [Hickey's] life that continues to shadow his reputation as a writer.
— New York Review of Books