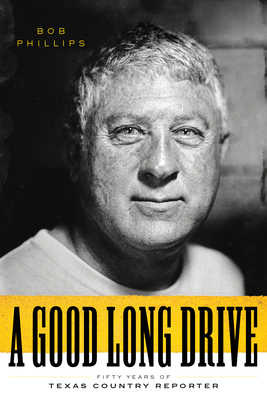 In 2021, Texas Country Reporter celebrates its fiftieth season on the air. Broadcast every week on stations across Texas, it focuses on “ordinary people doing extraordinary things.” And at the center of it is Bob Phillips, the show’s creator and host—an erstwhile poor kid from Dallas who ended up with a job that allowed him to rub elbows with sports figures, entertainers, and politicians but who preferred to spend his time on the back roads, listening to less-famous Texans tell their stories.

In this memoir, Phillips tells his own story, from his early days as a reporter and his initial pitch for the show while a student at SMU to his ongoing work at the longest-running independently produced TV show in American television history. As we travel with Phillips on his journey, we meet Willie Nelson and former Dallas Cowboys coach Tom Landry; reflect on memorable, unusual, and challenging show segments; experience the behind-the-scenes drama that goes on in local television; witness the launching of an annual festival; and discover the unbelievable allure of Texas, its culture, and, especially, its people. Spanning generations, A Good Long Drive is proof that life’s journey really is a destination unto itself.

Bob Phillips is the host of Texas Country Reporter, a half-hour television show that is syndicated across Texas, and the author of several books related to the stories told on the show.
If you love Texas and all of its quirks, cool things and cool people, add this book to your collection.
— Abilene Reporter-News

[A Good Long Drive] details [Phillips'] life, gives a behind-the-scenes look at how TCR came to be, and highlights some of Phillips’s favorite stories from the road.
— Garden and Gun

[A Good Long Drive] recounts many memorable, unusual, and challenging tales...Phillips also recounts behind the scenes drama in the television industry, describes the people, places, and culture of Texas, and encourages us to see life's journey as a destination.
— County Line Magazine