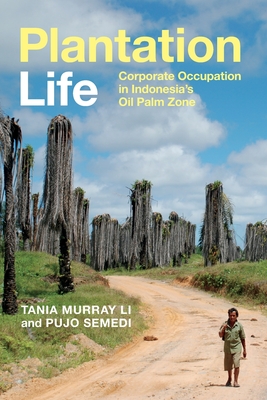 
Not On Our Shelves—Ships in 1-5 Days
In Plantation Life Tania Murray Li and Pujo Semedi examine the structure and governance of Indonesia's contemporary oil palm plantations in Indonesia, which supply 50 percent of the world's palm oil. They attend to the exploitative nature of plantation life, wherein villagers' well-being is sacrificed in the name of economic development. While plantations are often plagued by ruined ecologies, injury among workers, and a devastating loss of livelihoods for former landholders, small-scale independent farmers produce palm oil more efficiently and with far less damage to life and land. Li and Semedi theorize "corporate occupation" to underscore how massive forms of capitalist production and control over the palm oil industry replicate colonial-style relations that undermine citizenship. In so doing, they question the assumption that corporations are necessary for rural development, contending that the dominance of plantations stems from a political system that privileges corporations.
Tania Murray Li is Professor of Anthropology at the University of Toronto and author of Land's End: Capitalist Relations on an Indigenous Frontier, also published by Duke University Press. Pujo Semedi is Associate Professor of Anthropology at Universitas Gadjah Mada and author of Close to the Stone, Far from the Throne: The Story of a Javanese Fishing Community, 1820s-1990s.