The Surrounds: Urban Life Within and Beyond Capture (Paperback) 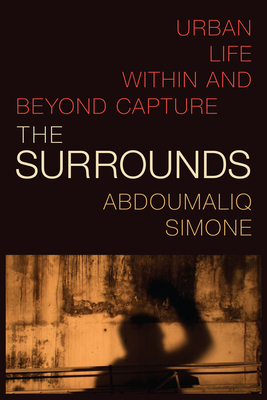 The Surrounds: Urban Life Within and Beyond Capture (Paperback)


In Stock—Click for Locations
In The Surrounds renowned urbanist AbdouMaliq Simone offers a new theorization of the interface of the urban and the political. Working at the intersection of Black studies, urban theory, and decolonial and Islamic thought, Simone centers the surrounds-those urban spaces beyond control and capture that exist as a locus of rebellion and invention. He shows that even in clearly defined city environments, whether industrial, carceral, administrative, or domestic, residents use spaces for purposes they were not designed for: schools become housing, markets turn into classrooms, tax offices transform into repair shops. The surrounds, Simone contends, are where nothing fits according to design. They are where forgotten and marginalized populations invent new relations and ways of living and being, continuously reshaping what individuals and collectives can do. Focusing less on what new worlds may come to be and more on what people are creating now, Simone shows how the surrounds are an integral part of the expansiveness of urban imagination.
AbdouMaliq Simone is Senior Professorial Fellow at the Urban Institute at the University of Sheffield and author of For the City Yet to Come: Changing African Life in Four Cities, also published by Duke University Press, Improvised Lives: Rhythms of Endurance in an Urban South, and Jakarta: Drawing the City Near.