Why We Can't Have Nice Things: Social Media's Influence on Fashion, Ethics, and Property (Paperback) 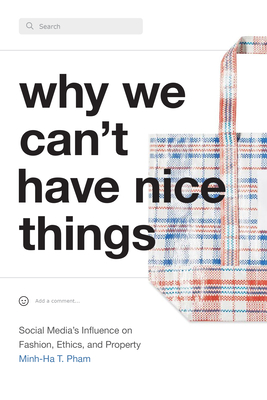 Why We Can't Have Nice Things: Social Media's Influence on Fashion, Ethics, and Property (Paperback)


On Our Shelves Now at:
In 2016, social media users in Thailand called out the Paris-based luxury fashion house Balenciaga for copying the popular Thai "rainbow bag," using Balenciaga's hashtags to circulate memes revealing the source of the bags' design. In Why We Can't Have Nice Things Minh-Ha T. Pham examines the way social media users monitor the fashion market for the appearance of knockoff fashion, design theft, and plagiarism. Tracing the history of fashion antipiracy efforts back to the 1930s, she foregrounds the work of policing that has been tacitly outsourced to social media. Despite the social media concern for ethical fashion and consumption and the good intentions behind design policing, Pham shows that it has ironically deepened forms of social and market inequality, as it relies on and reinforces racist and colonial norms and ideas about what constitutes copying and what counts as creativity. These struggles over ethical fashion and intellectual property, Pham demonstrates, constitute deeper struggles over the colonial legacies of cultural property in digital and global economies.
Minh-Ha T. Pham is Associate Professor in the Graduate Program in Media Studies at the Pratt Institute and author of Asians Wear Clothes on the Internet: Race, Gender, and the Work of Personal Style Blogging, also published by Duke University Press.