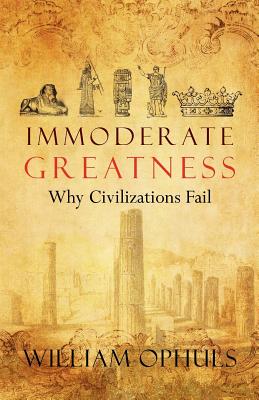 
Not On Our Shelves—Ships in 1-5 Days
(This book cannot be returned.)
*Immoderate Greatness* explains how a civilization's very magnitude conspires against it to cause downfall. Civilizations are hard-wired for self-destruction. They travel an arc from initial success to terminal decay and ultimate collapse due to intrinsic, inescapable biophysical limits combined with an inexorable trend toward moral decay and practical failure. Because our own civilization is global, its collapse will also be global, as well as uniquely devastating owing to the immensity of its population, complexity, and consumption. To avoid the common fate of all past civilizations will require a radical change in our ethos-to wit, the deliberate renunciation of greatness-lest we precipitate a dark age in which the arts and adornments of civilization are partially or completely lost.
William Ophuls spent eight years in the U. S. Foreign Service, serving in Washington, Abidjan, and Tokyo, before receiving a PhD in political science from Yale University in 1973. In 1977, he published *Ecology and the Politics of Scarcity*. It won two prizes and was instrumental in establishing the field of environmental politics. After teaching briefly at Northwestern University, he became an independent scholar and author. He has since published three books on the ecological, social, and political challenges confronting modern industrial civilization. When not at his writing desk, he spends his time rambling in nature, either in his native California or in the mountains of Europe.