Framed by War: Korean Children and Women at the Crossroads of Us Empire (Nation of Nations #30) (Paperback) 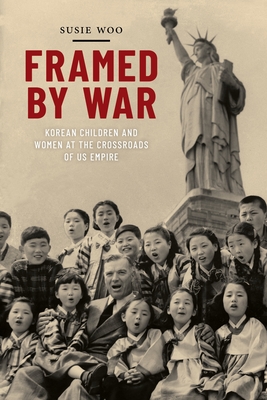 Framed by War: Korean Children and Women at the Crossroads of Us Empire (Nation of Nations #30) (Paperback)

Korean children and women are the forgotten population of a forgotten war. Yet during and after the Korean War, they were central to the projection of US military, cultural, and political dominance. Framed by War examines how the Korean orphan, GI baby, adoptee, birth mother, prostitute, and bride emerged at the heart of empire. Strained embodiments of war, they brought Americans into Korea and Koreans into America in ways that defined, and at times defied, US empire in the Pacific. What unfolded in Korea set the stage for US postwar power in the second half of the twentieth century and into the twenty-first. American destruction and humanitarianism, violence and care played out upon the bodies of Korean children and women. Framed by War traces the arc of intimate relations that served as these foundations. To suture a fragmented past, Susie Woo looks to US and South Korean government documents and military correspondence; US aid organization records; Korean orphanage registers; US and South Korean newspapers and magazines; and photographs, interviews, films, and performances. Integrating history with visual and cultural analysis, Woo chronicles how Americans went from knowing very little about Koreans to making them family, and how Korean children and women who did not choose war found ways to navigate its aftermath in South Korea, the United States, and spaces in between.
Susie Woo is Associate Professor of American Studies at California State University, Fullerton.