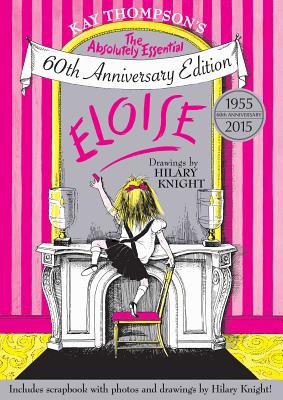 
On Our Shelves Now at:
Eloise has been delighting readers for more than sixty years—though she’s still not a day over six. Celebrate with a beautifully illustrated hardcover edition of the original classic storybook with gobs of bonus material!

Eloise is a very special little girl who lives at The Plaza Hotel in New York City. She may not be pretty yet, but she’s definitely already a real person. She loves learning about people who aren’t boring. Take Eloise home with you and she’ll introduce you to life at The Plaza. You’ll be glad you did!

In the front of this book we have printed the original Eloise story and pictures, and in the back of it there are sketches and stories by Mr. Hilary Knight (the illustrator), photographs of Miss Kay Thompson when she was young and fabulous and rather like Eloise, and absolutely loads of information that you simply can’t can’t can’t get anywhere else. Here’s the thing: Whether you are just about to fall in love with Eloise or have already baked her a cake, you ought to have this book. (Charge it please and thank you very much.)
Kay Thompson (1909–1998) was a singer, dancer, vocal arranger, and coach of many MGM musicals in the 1940s. The Eloise character grew out of the voice of a precocious six-year-old that Miss Thompson put on to amuse her friends. Collaborating with Hilary Knight on what was an immediate bestseller, Kay Thompson became a literary sensation when Eloise was published in 1955. The book has sold more than two million copies to date. Kay Thompson and Hilary Knight created four more Eloise books, Eloise in Paris, Eloise at Christmas, Eloise in Moscow, and Eloise Takes a Bawth.

Hilary Knight, son of artist-writers Clayton Knight and Katharine Sturges, was educated at the Art Students League, where he studied with Reginald Marsh. Besides the Eloise books, Hilary Knight has illustrated more than fifty books for children, six of which he wrote himself. He lives and works in New York City, not far from The Plaza Hotel.