Ka: Dar Oakley in the Ruin of Ymr (Hardcover) 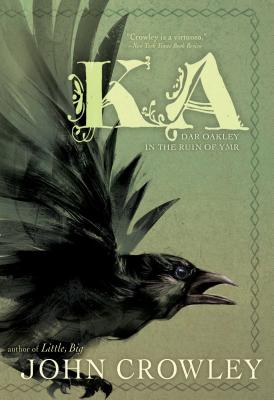 Ka: Dar Oakley in the Ruin of Ymr (Hardcover)

From award-winning author John Crowley comes an exquisite fantasy novel about a man who tells the story of a crow named Dar Oakley and his impossible lives and deaths in the land of Ka.

A Crow alone is no Crow.

Dar Oakley—the first Crow in all of history with a name of his own—was born two thousand years ago. When a man learns his language, Dar finally gets the chance to tell his story. He begins his tale as a young man, and how he went down to the human underworld and got hold of the immortality meant for humans, long before Julius Caesar came into the Celtic lands; how he sailed West to America with the Irish monks searching for the Paradise of the Saints; and how he continuously went down into the land of the dead and returned. Through his adventures in Ka, the realm of Crows, and around the world, he found secrets that could change the humans’ entire way of life—and now may be the time to finally reveal them.
John Crowley was born in the appropriately liminal town of Presque Isle, Maine in 1942, his father then an officer in the US Army Air Corps. He grew up in Vermont, northeastern Kentucky and (for the longest stretch) Indiana, where he went to high school and college. He moved to New York City after college to make movie and found work in documentary films, an occupation he still pursues. He published his first novel The Deep in 1975, and his fifteenth volume of fiction, Four Freedoms, in 2009. Since 1993 he has taught creative writing at Yale University. In 1992 he received the Award in Literature from the American Academy and Institute of Arts and Letters. In 2006 he was awarded the World Fantasy Award for Lifetime Achievement. He finds it more gratifying that almost all his work is still in print.
A Los Angeles Times Best Book of 2017 Selection

Elegiacal and exhilarating, Ka is both consoling and unflinching in its examination of what it means to be human, in life and death. If, as Robert Graves wrote, “There is one story and one story only,” we are very lucky that John Crowley is here to tell it to us."
— -- The Los Angeles Times

"John Crowley is one of the finest writers of our time.

In sum, Ka is just the kind of deeply moving, deeply personal “late work” that a great artist sometimes produces at the end of his or her career."
— -- Michael Dirda,

"One of the finest fantasy novels of the year, gains the power of a true epic."
— -- The Chicago Tribune

“John Crowley has long been one of our country's absolutely finest novelists, the equivalent in what could generally called Fantastika to John Le Carre in spy literature, and in KA he has given us a masterpiece in the form of a beast fable. Sentence by beautiful sentence, the book sustains its ravishing narrative above a constant awareness of the duality, partiality, and mystery of our own goals, desires, and excitements. An entirely grown-up wisdom and hard-won grace suffuse every scene. Quietly, subtly, the tale of Dar Oakley entertains its readers, for sure, but expands and enhances them as well.”
— -- Peter Straub, New York Times bestselling author of INTERIOR DARKNESS and GHOST STORY

"Covering thousands of years of human history, Ka: Dar Oakley in the Ruin of Ymr may seem at times more like a chronicle than a tale, but the tales within it, from Dar Oakley’s own love stories, to his acerbically distanced view of human development, to the nearly self-contained tales of figures like Fox Cap, the Brother, Anna Kuhn, and the narrator himself, recapitulate its central themes of death, survival, and the value of story in ways that are as haunting and provocative as anything Crowley – or almost anyone else in the last several years – has written. It may be some sort of masterpiece."
— -- Locus Magazine

"This unusual narrative from Crowley ostensibly consists primarily of the recollections of a long-lived crow who’s capable of communicating with humans, one of whom named him Dar Oakley. Crowley cleverly grounds the book with a prologue recounted by an unnamed narrator in a near-future world on the verge of collapse from climate change; he recently lost his wife and is “mortally sick in more than body” himself. It’s never clear whether the human lead merely imagines all of Dar Oakley’s reminiscences, but this ambiguity sustains, rather than lessens, the reader’s engagement with Dar Oakley’s stories."
— -- Publishers Weekly