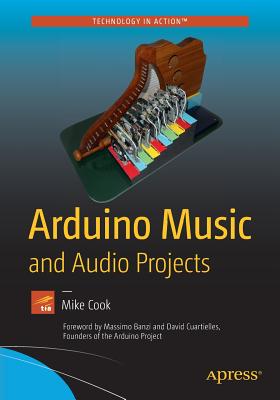 
Not On Our Shelves—Ships in 1-5 Days
This book is for musical makers and artists who want to gain knowledge and inspiration for your own amazing creations. "Grumpy Mike" Cook, co-author of several books on the Raspberry Pi and frequent answerer of questions of the Arduino forums, brings you a fun and instructive mix and simple and complex projects to help you understand how the Arduino can work with the MIDI system to create musical instruments and manipulate sound.
In Part I you'll find a set of projects to show you the possibilities of MIDI plus Arduino, covering both the hardware and software aspects of creating musical instruments. In Part II, you learn how to directly synthesize a wave form to create your own sounds with Arduino and concludes with another instrument project: the SpoonDuino. Finally, in Part III, you'll learn about signal processing with the Arduino Uno and the Due -- how to create effects like delay, echo, pitch changes, and realtime backwards audio output.
If you want to learn more about how to create music, instruments, and sound effects with Arduino, then get on board for Grumpy Mike's grand tour with Arduino Music and Sound Projects.
Mike Cook has been making electronic things since he was at school in the 60s. A former Lecturer in Physics at Manchester Metropolitan University, he has written more than three hundred computing and electronics articles in the pages of computer magazines for 20 years starting in the 1980s, mainly for The Micro User and Acorn Computing. Leaving the University after 21 years when the Physics department closed down, he got a series of proper jobs where he designed digital TV set top boxes and access control systems. Now retired and freelancing, he spends his days surrounded by wires, exhibiting at Maker Fairs, and patrolling the Arduino forum as Grumpy Mike. He is the co-author of three books about the Raspberry Pi, all published by Wiley: Raspberry Pi For Dummies, First and Second editions (with Sean McManus); Raspberry Pi Projects (with Andrew Robison); and Raspberry Pi Projects for Dummies (with Jonathan Evans). He also has a monthly column in The MagPi, an online and print magazine published by the Raspberry Pi foundation.