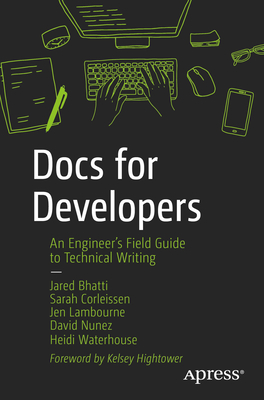 Learn to integrate programming with good documentation. This book teaches you the craft of documentation for each step in the software development lifecycle, from understanding your users' needs to publishing, measuring, and maintaining useful developer documentation.

Well-documented projects save time for both developers on the project and users of the software. Projects without adequate documentation suffer from poor developer productivity, project scalability, user adoption, and accessibility. In short: bad documentation kills projects.

Docs for Developers demystifies the process of creating great developer documentation, following a team of software developers as they work to launch a new product. At each step along the way, you learn through examples, templates, and principles how to create, measure, and maintain documentation--tools you can adapt to the needs of your own organization.

Who This Book Is For

Ideal for software developers who need to create documentation alongside code, or for technical writers, developer advocates, product managers, and other technical roles that create and contribute to documentation for their products and services.


Jared BhattiJared is a Staff Technical Writer at Alphabet, and the co-founder of Google's Cloud documentation team. He's worked for the past 14 years documenting an array of projects at Alphabet, including Kubernetes, App Engine, Adsense, Google's data centers, and Google's environmental sustainability efforts. He currently leads technical documentation at Waymo and mentors several junior writers in the industry. Zachary Sarah Corleissen Zach began this book as the Lead Technical Writer for the Linux Foundation and ended it as Stripe's first Staff Technical Writer. Zach served as co-chair for Kubernetes documentation from 2017 until 2021, and has worked on developer docs previously at GitHub, Rackspace, and several startups. They enjoy speaking at conferences and love to mentor writers and speakers of all abilities and backgrounds. Heidi Waterhouse Heidi spent a couple decades at Microsoft, Dell Software, and many, many startups learning to communicate with and for developers. She currently works as a principal developer advocate at LaunchDarkly, but was reassured to find that technical communication is universal across all roles. David Nunez David heads up the technical writing organization at Stripe, where he founded the internal documentation team and wrote for Increment magazine. Before Stripe, he founded and led the technical writing organization at Uber and held a documentation leadership role at Salesforce. Having led teams that have written about cloud, homegrown infrastructure, self-driving trucks, and economic infrastructure, he's studied the many ways that technical documentation can shape the user experience. David also acts as an advisor for several startups in the knowledge platform space. Jen Lambourne Jen leads the technical writing and knowledge management discipline at Monzo Bank. Before her foray into fintech, she led a community of documentarians across the UK government as Head of Technical Writing at the Government Digital Service (GDS). Having moved from government to finance, she recognizes she's drawn to creating inclusive and user-centred content in traditionally unfriendly industries. She likes using developer tools to manage docs, demystifying the writing process for engineers, mentoring junior writers, and presenting her adventures in documentation at conferences.