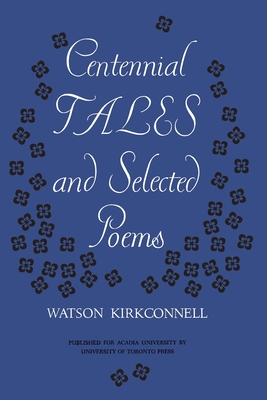 An all-inclusive edition of the poetry of Watson Kirkonnell would run to some ten large volumes of original verse and translations. His original verse would fill two volumes the size of this one, and his translated verse-from Icelandic, Italian, Dutch, French, Magyar, Latin, Ukrainian and Polish-would fill 5,000 pages. No poet in the English-speaking tradition is more deeply grounded in world literature.

The original poetry of Watson Kirkconnell has been primarily narrative in character: first, the twelve philosophically slanted books of his Spenserian epic, The Eternal Quest; then the seventeen vivid narratives in The Flying Bull, and Other Tales, a sort of Western echo of The Canterbury Tales; and finally the thirty narrative poems of his new Centennial Tales, many of which were written in 1964. These are framed about the history of Canada, and are written in honour of the nation's Centennial in 1967. They range from the coming of the first "Amerindians" from Asia about 30,000 B.C. to a possible atomic holocaust in A.D. 2000, and include poems on the Quebec Conference of 1864, the Vimy Memorial, the Italian Campaign and the Canadians in Cyprus.

This volume also contains some lyrics from Dr. Kirkconnell's light opera, The Mod at Grand Pr , and the whole of his Greek-style drama, Let My People Go, with its setting in Egypt just before the Exodus and its issues in the present. The original poetry has been arranged in roughly the reverse of chronological order, while the translations are arranged according to the dates of publication.