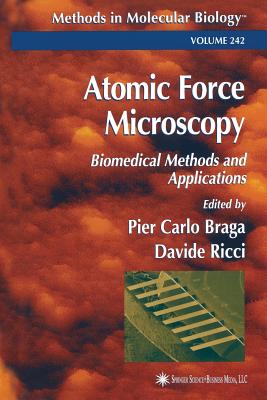 
Not On Our Shelves—Ships in 1-5 Days
The natural, biological, medical, and related sciences would not be what they are today without the microscope. After the introduction of the optical microscope, a second breakthrough in morphostructural surface analysis occurred in the 1940s with the development of the scanning electron microscope (SEM), which, instead of light (i. e., photons) and glass lenses, uses electrons and electromagnetic lenses (magnetic coils). Optical and scanning (or transmission) electron microscopes are called "far-field microscopes" because of the long distance between the sample and the point at which the image is obtained in comparison with the wavelengths of the photons or electrons involved. In this case, the image is a diffraction pattern and its resolution is wavelength limited. In 1986, a completely new type of microscopy was proposed, which, without the use of lenses, photons, or electrons, directly explores the sample surface by means of mechanical scanning, thus opening up unexpected possibilities for the morphostructural and mechanical analysis of biological specimens. These new scanning probe microscopes are based on the concept of near-field microscopy, which overcomes the problem of the limited diffraction-related resolution inherent in conventional microscopes. Located in the immediate vicinity of the sample itself (usually within a few nanometers), the probe records the intensity, rather than the interference signal, thus significantly improving resolution. Since the most we- known microscopes of this type operate using atomic forces, they are frequently referred to as atomic force microscopes (AFMs).