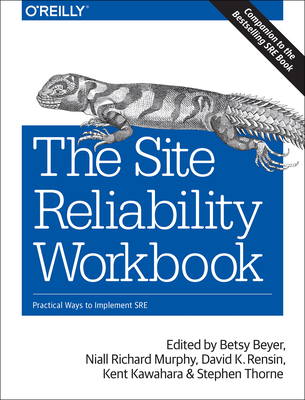 In 2016, Google 's Site Reliability Engineering book ignited an industry discussion on what it means to run production services today and why reliability considerations are fundamental to service design. Now, Google engineers who worked on that bestseller introduce The Site Reliability Workbook, a hands-on companion that uses concrete examples to show you how to put SRE principles and practices to work in your environment.

This new workbook not only combines practical examples from Google 's experiences, but also provides case studies from Google 's Cloud Platform customers who underwent this journey. Evernote, The Home Depot, The New York Times, and other companies outline hard-won experiences of what worked for them and what didn t.

Dive into this workbook and learn how to flesh out your own SRE practice, no matter what size your company is.

Betsy Beyer is a Technical Writer for Google Site Reliability Engineering in NYC. She has previously written documentation for Google Datacenters and Hardware Operations teams. Before moving to New York, Betsy was a lecturer on technical writing at Stanford University.Niall Murphy has been working in Internet infrastructure for twenty years. He is a company founder, a published author, a photographer, and holds degrees in Computer Science & Mathematics and Poetry Studies.Dave Rensin is a Google SRE Director, previous O'Reilly author, and serial entrepreneur. He holds a degree in Statistics.Kent Kawahara is a Program Manager for Google's Site Reliability Engineering team focused on Google Cloud Platform customers and is based in Sunnyvale, CA. In previous Google roles, he managed technical and design teams to develop advertising support tools and worked with large advertisers and agencies on strategic advertising initiatives. Prior to Google, he worked in Product Management, Software QA, and Professional Services at two successful telecommunications startups. He holds a BS Electrical Engineering and Computer Science from the University of California at Berkeley.Stephen Thorne is a Senior Site Reliability Engineer at Google. He currently works in Customer Reliability Engineering, helping to integrate Google's Cloud customers' operations with Google SRE. Stephen learned how to be an SRE on the team that runs Google's advertiser and publisher user interfaces, and later worked on App Engine. Before his time at Google, he fought against spam and viruses in his home country of Australia, where he also earned his B.S. in Computer Science.