Pancakes in Paris: Living the American Dream in France (Paperback) 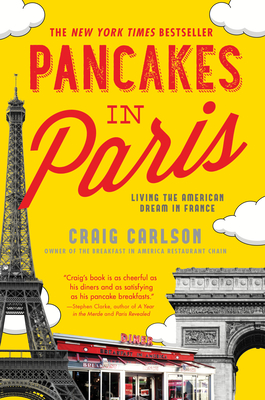 Pancakes in Paris: Living the American Dream in France (Paperback)

“Pancakes and Paris make for a winning combination in this charming memoir. Readers will cheer for Carlson as he follows his dream of opening a restaurant in another country. He faces many challenges, but perseveres until he reaches his goal. Thanks to Carlson it is now possible to get hearty pancakes and other treats at Breakfast in America, the first American-style diner in Paris. This is a perfect read for armchair travelers or for Francophiles planning their next trip to the City of Lights.”
— Elizabeth Merritt, Titcomb's Bookshop, East Sandwich, MA

Craig Carlson was the last person anyone would expect to open an American diner in Paris. He came from humble beginnings in a working-class town in Connecticut, had never worked in a restaurant, and didn't know anything about starting a brand-new business. But from his first visit to Paris, Craig knew he had found the city of his dreams, although one thing was still missing—the good ol' American breakfast he loved so much.

Pancakes in Paris is the story of Craig tackling the impossible—from raising the money to fund his dream to tracking down international suppliers for "exotic" American ingredients... and even finding love along the way. His diner, Breakfast In America, is now a renowned tourist destination, and the story of how it came to be is just as delicious and satisfying as the classic breakfast that tops its menu.

Craig Carlson is the owner and founder of Breakfast in America, the first American-style diner in Paris, which has been featured in The Lonely Planet and Frommer's Paris travel guides. He lives in Paris with his partner.
"Craig's book is cheerful as his diners, and as satisfying as his pancake breakfasts." — Stephen Clarke, author of A Year in the Merde and Paris Revealed

"What makes this memoir stand out though, is that he structures the story in such a way that the reader can't wait to find out what happens next. We learn about him, the man, in the same way that he does. " — Underrated Reads

"Pancakes in Paris is the tale of how Carlson turns his dream into a reality. And unlike many books of this type, it does a wonderful job of telling it like it really is. " — eat.live.travel.write.

"The author's depictions of France as a living organism with which the industrious foreigner must learn to make peace in order to survive—one that is nonetheless responsive and eventually, even welcoming to having its tastes influenced through the right stimuli—will appeal to Francophiles, gourmands, and restaurateurs alike. Carlson's France, warts and all, is one that I hope to taste someday." — Flavorful World

"Carlson's background as a former scriptwriter is evident in his writing style: The book reads like a TV series where you can't wait for the next episode, or in this case, to read the next chapter. It's almost like a reality tv show is playing in your head. " — The Paris Readers Circle

"Anyone who fantasizes about selling everything and moving to France should read this refreshingly honest memoir about what it really takes to operate a successful business in Paris. The real takeaway is how Craig's love for his adopted city and its people is stronger than ever despite -- or perhaps because of -- the Kafkaesque ordeal he went through to make his dreams come true here." — Heather Stimmler-Hall, editor of the Secrets of Paris newsletter (www.secretsofparis.com)

"A hearty and delicious serving of adventures about starting the first American breakfast joint in Paris." — Jennifer Coburn, author of We'll Always Have Paris

"I loved reading this book. Craig Carlson tells his story with an openness and an ironic sense of humor. Pancakes in Paris is a great success story and will inspire readers to never stop trying to achieve their goals." — Roger S. Christiansen, Director, Friends and Hannah Montana

"Pancakes in Paris is a funny, inspiring, moving, and provocative story. Reading how Carlson navigates through a French legal, social and economic system (which, say the least, is very different from America's) on his journey to success is no less than fascinating." — The Huffington Post

"If you are a foodie and Francophile, and if you like rags-to-riches stories, you should curl up on an armchair with a strong cup of coffee and a croissant and tuck into Craig Carlson's memoir: Pancakes in Paris...a quintessential American tale, big and brash and filled with charm. " — Powell's Book Blog

"Finding American-style bacon and breakfast sausage in France wasn't easy, nor was the diner's opening in the middle of a snowstorm or fights over Heinz ketchup: Carlson's book is full of amusing tales." — NorthJersey.com

"In Pancakes in Paris: Living the American Dream in France, Craig Carlson shares how he came to open a successful American diner in one of the world's culinary capitals. Having never started a business or even worked in a restaurant before, he admits his goal was a long-shot, but that just makes his story all the more inspiring. His adventures are full of interesting characters, delicious food, and charming sites." — Bustle

"With Carlson recounting hurdles from amusing...to serious, this memoir makes for a delicious read." — Booklist

"The author demonstrates that no idea is too crazy if one has the determination to pursue it to its fruition. A light, entertaining story of how a man turned his pipe dream into a profitable, highly respected business." — Kirkus Reviews

"[A] sweet and entertaining memoir details how a former Hollywood screenwriter opens an American diner in Paris and lives happily after...Carlson's narrative is an inspirational, tasty trip through one man's delightful and hard-won success." — Publishers Weekly